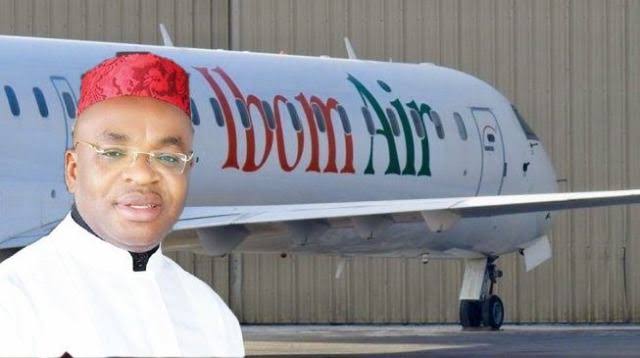 Akwa Ibom State is carefully ramping up an aviation business it began nearly four years ago, with increase in its aircraft fleet in a bid to capture a bigger share of Nigeria’s much-unharnessed industry.

The government run airlines company, Ibom Air, has taken delivery of a fourth aircraft, a 90-seater CRJ900 bombardier, thereby expanding the capacity of its fleet.

With registration number 5N-BXP, the aircraft is said to possess the latest hyper-technology high efficiency air filter (HEAF), a passenger safety device against viruses, including Coronavirus.

Receiving the plane, the state governor, Udom Emmanuel, now in his second term of office, said the aircraft is the latest addition to Ibom Air’s fleet; and that the aircraft is still within the warranty of Nigeria’s domestic aviation industry.

Governor Emmanuel said the dream of the state owning an airliner started in 2016; and that experts have attested to the quality of the airplanes owned and operated by Ibom Air.

“This is the latest in Ibom Air’s fleet; and when you have an airplane that is still within the warranty in domestic aviation, you do not have to be afraid of Covid-19,” he said.

The governor said the industry will keep growing with improvement and addition to the number of airplanes operated by the state airlines company.

Emmanuel boasts of the new aircraft saying: “the air efficiency is super; there’s nothing to fear; and also our safety standard remains to be beaten by any other airline. I have the assurance of the management of the business that they will maintain the company. Instead of going down, they will improve,” he said.

Perhaps, Akwa Ibom may be on a gradual move to reset its microeconomy out of oil-based monoeconomic volatility by engaging in an airlines business, a non-oil sector, which its national government, Nigeria, seriously needs.

Akwa Ibom, an oil-rich sub-national state in Nigeria’s oil producing delta region, is currently the biggest revenue earner from crude oil. But that has badly dipped due to the global price war and fallen demand of the commodity.

Nigeria, Africa’s top crude oil producer, is surveyed by African Energy Chamber (AEC) to be among the continent’s commodity-reliant countries that would be hardest-hit from the impact of COVID-19 pandemic.

AEC has already advanced some macroeconomic models, which it advised Africa’s top oil producers to adopt in order to steer the ship of their states out of COVID-19 distress. It called it “Common sense economic agenda.”

Udom is sure that the state does not have to be afraid of flying the plane because it is fitted with air efficiency including safety-safe-net.

The governor also said the business has various cases setup, including full and outline, which is in line with the aim of starting the business.

He said Ibom Air is planning to dominate the aviation industry in the entire sub-region of West Africa with expansion and to compete in the world.

The chairman of Ibom Air Limited, Idongesit Nkanga, a retired air commodore, said the newly acquired airplane which was expected since December last year but for issues of clearance by authorities in charge of aviation in Nigeria. He said it is good that the aircraft finally arrived.

Nkanga said the plane is packed with modern facilities, including hyper technology that staves off bacteria and viruses, coronavirus inclusive.

The chief executive officer of Ibom Air, Mfon Udom expressed happiness on the addition of the new aircraft to the company’s fleet, promising effective and efficient service delivery to the teeming passengers of the state owned aviation business  at resumption of flight movement.