Anambra State has been fairly stable economically and politically for well over a decade, providing ample development with its Community Choose Your Project initiative, acknowledged by the globally influential Forbes Magazine as a model for development in Africa. For instance, in March 2019, Governor Obiano announced that the state’s gross domestic product (GDP) increased 40 percent to N4.2 trillion in the last five years (2014-2019), from N3 trillion previously. He promised to expand the state’s economic base by 2022 when he formally leaves office. 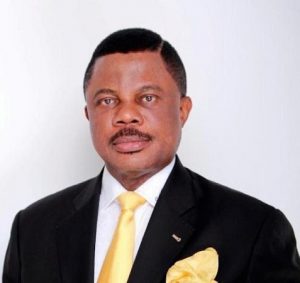 However, what is uncertain today is how far the nearly $10.5 billion GDP economy of the state can hold out in the ongoing foreboding gubernatorial electioneering with its already heated polity hitting all the state’s socio-economic sectors. For about 16 years now, the state has been governed by the All Progressives Grand Alliance (APGA) party, founded and promoted by the late Chukwuemeka Odumegwu-Ojukwu, the former Biafran leader.

But red flags are being raised from no higher place than Government House, Awka, about what is being seen as a potential source of what could perhaps turn into political instability in the state, with shattering socio-economic implications.
The concern stems from attempts by the two major political parties – the centre-ruling All Progressives Congress (APC) and main opposition People’s Democratic Party (PDP) – to choose their flag-bearers in the run up to November 6 state governorship election. Whereas the ruling APGA had successfully chosen its party flagbearer – Chukwuma Charles Soludo – former Central Bank of Nigeria (CBN) governor to vie with other contestants, those for the APC and PDP have become a bitter fight, seriously threatening to unsettle the state.

PDP’s primary election came out with two candidates from two camps: Ugochukwu Uba, former senator and older brother of Chris Uba, who heads the camp, and Valentine Ozigbo, an otherwise decent former corporate executive, from Ndubuisi Nwobu’s camp. Each group appears to suffer a grave legitimacy crisis. Chris Uba’s group lays claim to legitimacy via an Abuja federal high court which twice declared Nwobu’s camp illegal, bringing back to office a 2017 executive committee led by Chris Uba. But most PDP prominent members in the state belong to the Nwobu faction, to the effect that the group sent by the party’s national leadership to conduct the primary election worked with the Nwobu faction, rather than the Chris Uba group favoured by the judicial pronouncement. Analysts say, if the latter group is legitimate, could the prominent Nigerians, including Phillip Shuaibu, Edo State deputy governor, who was chairman of the electoral panel, be said to have flagrantly and brazenly defied a court order in public. On the other hand, if the order obtained by the Chris Uba group is legitimate, why are no PDP members of consequence identifying with Uba and his acolytes? Curiously though, should the faction produce the elder brother of its leader as the gubernatorial nominee.
“Has politics in our state become so incestuous?” queried Governor Willie Obiano in a statement signed by C. Don Adinuba, commissioner for information and public enlightenment, in Awka, the Anambra capital.
With the PDP parallel congress being controversial and contentious, that of APC even raised the bar in that regard. For instance, 13 out of the 14 aspirants issued a statement vowing that there were no primaries either in the local government areas or at the state level which Andy Uba could have possibly won. The party’s officials, including local government chairmen and secretaries, claim that there were no voting materials anywhere. Independent reports confirm that there were no electoral materials up until 5.30 pm Saturday evening June 26. Even Chris Ngige, the Minister of Employment and Productivity who had been the state governor, said the 13 aspirants were right, supporting their call for another day for the party’s primary election.
Grave implications for democracy?
The incumbent state administration of Willie Obiano, with four months to leave office, is deeply worried at the ongoing political gerrymandering in the state. “The APC and PDP congresses have profound implications for democracy and progress in Anambra State in particular, and Nigeria in general,” the governor said. According to him, “the congresses have revealed that there are still actors in high places determined to perpetrate the culture of impunity which is arguably the biggest threat to our existence as a nation. Analysts posit that the issues of contentious congresses, legal suits and countersuits, coupled with downright disregard for judicial declarations are queries that should not be overlooked.
The Obiano government has therefore called on the national leaderships of the APC and PDP to cancel the contentious congresses, in order to ensure that “the tremendous progress in the areas of peace, stability and development, which the Anambra people have made in the last decade, continues”. The congresses are foreboding enough. No groups of persons in the state should be allowed to remind our people of the years of hooliganism, lawlessness and election rigging. Those years should not be brought back. Anambra people will not take kindly to any persons who dare to restore the culture of impunity, Adinuba wrote.
Costly campaigns
Nearly six months before the governorship polls proper, campaign costs are already running high. APC pegged its nomination form at N13 million, excluding sundry expenditures. Two of the aspirants announced their withdrawal, citing irregularities in the primaries, thereby losing N26 million, thirteen other aspirants who called for cancelation of the primary election would lose N169 million. For the PDP, the total nomination fee was N22.5 million made up of N20 million nomination form and N2.5 expression of interest (EoI). The party generated N356 million from sale of nomination forms alone, excluding sundry expenditures such as pay-outs to canvass votes from delegates.
Businessamlive Website Stats