A three-day strike by Bank of England support staff will go ahead after last-minute talks facilitated by a government-run arbitrator failed to resolve the pay dispute with the bank, the union said after it agreed to delay the start of strike action ‘in a gesture of goodwill’.

Some 95 per cent of staff in maintenance, security, and other service roles voted earlier this month for a four-days of strike action from Monday over a long-running pay dispute.

“The strike will now take place from Tuesday to Thursday,” the union said. 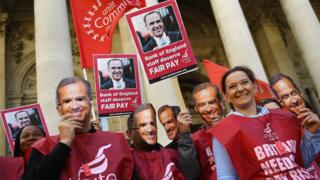 Employees are unhappy about a below inflation pay rise of 1%.

It said that the dispute was caused by the bank’s imposition of a 1 per cent increase on its total wage bill for the current financial year, while it leaves rises for individual staff at the discretion of line managers.

Unite members are calling on the Bank of England to give staff fair pay following the imposition of a derisory pay settlement without negotiating with recognised union Unite.

In addition, staff in the Bank of England “parlours” which are meeting rooms on the ground floor of the Bank’s building in Threadneedle Street will walk out. The staff are involved in a variety of work including security and catering as well as conducting visitors around the bank.

A Bank of England spokesperson said the Bank had been told that the industrial action called by Unite would begin at midnight for three days.

“The Union balloted approximately 2% of the workforce,” the statement said.

“The Bank has plans in place so that all essential business will continue to operate as normal during this period. The Bank has been in talks with Unite up to and including today and remains ready to continue those talks at any time.”

Unite said the dispute centred on the “derisory” pay settlement that the bank had imposed on staff without the union’s agreement. It was the second year running that staff had received a below inflation pay offer, it said.

Unite London and Eastern regional secretary Peter Kavanagh said its members had “been left with no choice but to take industrial action”.

“Mark Carney should come to the picket lines outside this iconic British bank today and explain why hardworking men and women deserve to face years of pay cuts.

“They are struggling to pay their bills and feed their families because the bank has unjustly imposed a below inflation or zero pay rise,” he added.

Inflation was 2.6% last month, according to official figures.