The movement of the political capital of Nigeria from Lagos to Abuja 29 years ago appears not to have significantly changed anything about decongesting Lagos. Over those years, as the commercial life of Lagos had continued to attract more people and the city continued to grow, the infrastructural problems grew in tandem. Lagos State, now estimated at 23 million people, about 70 per cent of which makes up the megacity has become like an orphan within the context federal presence. Prominent among the infrastructural deficits besetting the rapidly expanding and affluent Lagos, generating 23 per cent of Nigeria’s GDP, are the problems of roads and bridges. 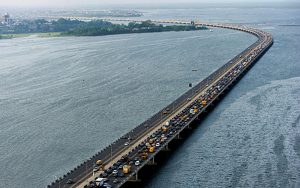 Unfortunately, these problems negatively affect the ease of doing business and the revenue realisable from commercial activities within Lagos State. As a port city, with a sea port and an international airport, Lagos deserves a better deal. Road, even in its mostly bad shapes, remains the only viable means of inter-city and intra-city transport on land from Lagos. But, whether by default or by design, the financial and commercial hub of Lagos, situated on the Lagos Island, has come with its peculiar complications. Although, historically, the island was the colonial and post-independence seat of power, the changing times would warrant a change in emphasis from the island to other parts of the megapolis. But, Lagos has something in common with Mumbai in India and New York City (NYC) in the United States (US) – that is traffic gridlock between the cities’ mainland and the peninsulas that are emblematic of their economies.

Manhattan peninsula (or island, as some refer to it) has become an epitome of a modern business and economic hub that stands out and away from urban mainland. Known for its traffic gridlock, the Manhattan Traffic Model (MTM), one of the most complex large-scale simulation models in existence, and designed in response to the NYC traffic woes, has many odds against it. The gridlock will remain a major problem except cars are banned within the area. In Mumbai, a city with a higher population density than even the capital, New Delhi, groans under the weight of daily traffic gridlock. Particularly excruciating at rush hours is the commute through the Bandra–Worli Sea Link, a bridge that links Bandra in the Western Suburbs of Mumbai with Worli in South Mumbai. The Lagos Third Mainland Bridge shares many features in common. The 11.8 kilometre-long bridge has become a commuter’s nightmare for many reasons.

The Third Mainland Bridge (TMB), first commissioned by President Shehu Shagari in 1980 and completed by President Ibrahim Babangida in 1990, has been subject to periodic closures for a number of times on complaints of structural defects. The bridge, which was to be an alternative to the existing links between the mainland and the island, appears to have become a victim of its own attractiveness to commuters. In 2012, at about August, the Federal Ministry of Works debunked speculations that the TMB was about collapsing due to structural defect, urging the motoring public, and indeed Lagosians, to disregard this “unfounded rumour.” Six years earlier, a joint inspection of the bridge was carried out by a combined team of engineers, following insinuations that the bridge was oscillating in 2006. There had been one closure too many. On August, 23, 2018, at midnight, the TMB was closed for three days to allow engineers to assess its structural status. And, on July 24, 2020 (nearly August), another closure – expected to last six months – has been ordered. It is important to look at what makes August a recurring decimal in the decisions on closure of the bridge for repairs.

The integrity of the TMB needs to be assured so as to keep commuters safe. It is important to be sure that the bridge does not carry more weight than it was designed to carry, especially during traffic gridlocks. Globally, traffic congestion is rising. And that can be dangerous on bridges. With long queues exceeding the carrying capacity, bridges are prone to the existential risk of sudden collapse. Mississippi River Bridge on an eight-lane, Interstate Road across the Mississippi River in Minneapolis, Minnesota, US, was Minnesota’s third busiest, carrying 140,000 vehicles daily. In 2007, Minneapolis Bridge engineers in Minnesota had carried out inspection of the metal structure. Before they could move to site, the bridge collapsed without warning shortly after 6 pm on August 1, 2007, loaded with rush hour traffic, taking down 111 vehicles, with 13 people dead and 145 injured. On August 14, 2018, in Italy, the Morandi Bridge in the city of Genoa, on the Genoa motorway bridge collapsed, killing at least 22 people, according to an Italian minister, although another source claimed it was 43. Mumbai’s bridge collapse in March, 2019, claimed six lives and injured 31. On April 8, 2020, again in Italy, the Albiano Magra bridge has collapsed in northern Italy, injuring one person.

Should Lagos Island be the only commercial hub in Lagos? Just what happens in case the TMB collapses before any alternative bridge is constructed? What human and economic costs would be entailed? What if Lagos decentralises its economic hub for ease of access, reduction in commuting time and spreading the benefits more widely? What savings would that make in man-hours? What contributions will that make in productivity? Clearly, Lagos is still far from what a modern city or a city of the future should be. Transportation relies mainly on road, with an old railway system operating substandard services.

C40 Cities, a global network of large cities, now covering 96 member cities, have some basic parameters for racing cities on measures aimed at tackling climate change and driving urban action that reduces greenhouse gas emissions and climate risks, while increasing the health, wellbeing and economic opportunities of urban citizens. The body, which disclosed that there are more than 66,000 electric buses on the streets of C40 cities now compared to fewer than 100 in 2010, scored Lagos poorly on a number of indices. It did not recognise Lagos in the area of transportation and urban planning and adaptation. The Sustainable Development Goal 11 focuses on making cities and human settlements inclusive, safe, resilient and sustainable. But failure to meet this goal is partly responsible for the one-sided development the urban Lagos has been experiencing, which also strains the bridge connecting the island and the mainland. The 2030 Goal 11 envisions the provision of access to safe, affordable, accessible and sustainable transport systems for all, improving road safety, notably by expanding public transport, with special attention to the needs of those in vulnerable situations, women, children, persons with disabilities and older persons. To stem the tide of rising inequality, the goal was also intended to ensure, by 2030, access for all to adequate, safe and affordable housing and basic services and to upgrade slums.

Considering the concentration of the Lagos business hub in the island, it is important to evolve urban development policies – built in response to traffic – to decentralise such hubs to reduce the stress in transit and manage the travel time within acceptable limits. Rather than spending heavily in developing any island through sand filling and keep attracting a mass of population from far-flung areas of Lagos daily, the economics of developing the suburbs will make the latter more attractive, more sensible and sustainable. The longevity of the Third Mainland Bridge (TMB) and any other bridge would be better and the lives of road and bridge users will be safe.