Brent oil rallied above $65 per barrel on Friday and was on track for a 5% gain this week on fears of a U.S. military attack on Iran that would disrupt flows from the Middle East, which provides more than a fifth of the world’s oil output. 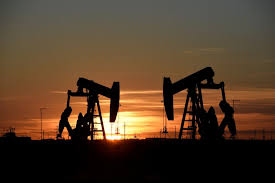 Brent crude was up $0.69, or 1.07%, at $65.14 a barrel at 1210 GMT. The global benchmark jumped 4.3% on Thursday and is on course for its first weekly gain in five weeks.
U.S. West Texas Intermediate crude was up 24 cents, or 0.42%, at $57.31 a barrel. The U.S. benchmark surged 5.4% on Thursday and is on track for a more than 9% increase this week.
“Crude prices are spiking on increased Middle East tensions after Iran shot down a U.S. drone in what the U.S. claims is international airspace,” said Jefferies analyst Jason Gammel.
Iran said it shot the drone over its territory.
Iranian officials told Reuters on Friday that Tehran had received a message from U.S. President Donald Trump through Oman overnight warning that a U.S. attack on Iran was imminent.
The officials said they had responded by saying that any attack would have regional and international consequences. They also said Supreme Leader Ayatollah Ali Khamenei was against talks but that they would convey the U.S. message to him.
The New York Times reported on Friday, citing sources, that Trump had approved military strikes against Iran but pulled back from launching the attacks.
Tensions have been on the rise because U.S. sanctions on Iran have severely reduced oil exports from OPEC’s third largest producer and Washington has blamed Tehran, which denies any role, for a series of attacks on oil tankers in the Gulf.
“There is no doubt that a severe disruption to the transit of oil through this vulnerable route would be extremely serious,” said consultancy FGE Energy in a note.
The demand-side outlook has also improved, with appetite for risk assets rising after the European and the U.S. central banks signaled possible rate cuts this week.
A weaker greenback tends to support oil prices because crude is usually priced in dollars.
Another macroeconomic factor supporting prices is the plan by Beijing and Washington to resume talks to resolve a trade tariff war that has hit economic growth prospects.
“Trade anxiety has died down, pushing energy prices higher as global growth will not be pressured by a prolonged tariff war,” said Alfonso Esparza, senior market analyst at OANDA.
Concern about slowing economic growth and a U.S.-China trade dispute had pulled oil lower in recent weeks. That came after Brent reached a 2019-high above $75 in April.
Businessamlive Website Stats