Brent is back at $60 for the first time in more than two years, but the big question is: Can crude hold onto its gains?

Oil prices firmed up in recent weeks but held back from key resistance points—roughly $60 per barrel for Brent, and around $55 per barrel for WTI. Oil traders were reluctant to test the upper limits of the “shale band” at $60, a threshold that has repeatedly forced traders to liquidate their bullish bets or get burned. Top analysts argue that it would take something really significant to allow oil to break above $60. 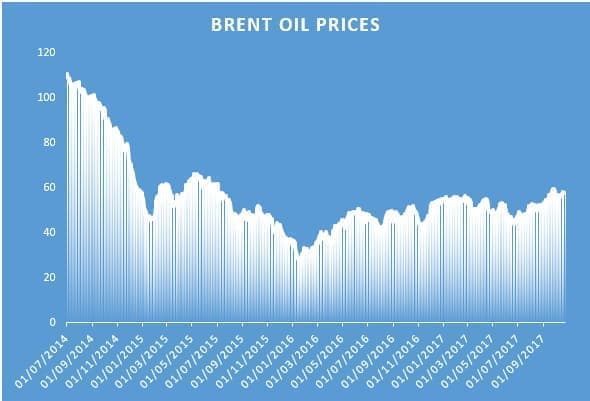 It remains to be seen if we are at that moment. But Brent moved up above $60 on Friday and held onto the gains during midday trading on Monday, a tentative sign that the oil market might be flirting with a new, higher range.

The proximate cause for the suddenly higher price is a series of comments from top OPEC and Russian officials last week, pointing to cohesion around another extension of the production cuts. Saudi crown prince Mohammed bin Salman said that “of course” he wanted to extend the cuts. Russian President Vladimir Putin suggested an extension through the end of 2018 a few weeks ago, leading everyone to think an extension is essentially a done deal.

On top of that, hedge funds and other money managers stepped up their bullish bets ahead of those comments, granting more leeway for oil futures to push higher. Bullish positioning rose by 2.6 percent in the week ending on October 24. “We have evidence that people are positioned long into OPEC in November; the consensus trade on the street is that they’ll extend cuts,” Chris Kettenmann, chief energy strategist at Macro Risk Advisors LLC, told Bloomberg. With an OPEC deal in November highly likely, “it makes it very hard to be aggressively short,” Kettenmann added.

Another reason that this time might be different is that the Brent futures curve is in a state of backwardation, meaning front-month contracts are trading at premium to oil futures dated further out. That tends to be a sign of a tighter market, and it also makes storage uneconomical since a trader would be paying for storage and then selling their product at a lower price in the future. Backwardation presages sharper drawdowns in inventories, suggesting that there is more tightening on the way. WTI has lagged behind Brent, but even the U.S. benchmark is moving toward backwardation.

That’s another way of saying that the actual fundamentals are improving—unlike other mini price rallies over the past three years. Inventories continue to decline and are tighter than at any point in years. OPEC seems determined to keep the current dynamic locked in for another year or so, and the fact that they’re telegraphing that resolve ahead of time might actually be enough to change market psychology.

The one unknown is if U.S. shale will respond, as it has in the past, with a quick spurt of new supply. After last year’s OPEC agreement, oil prices shot from the $40s to the $50s, and the rig count exploded. U.S. shale production surged from a recent low in mid-2016 at 8.5 million barrels per day (mb/d), rising up to 9.5 mb/d more recently (at least according to the weekly totals).

Will U.S. shale add a lot more supply if oil holds at $60? Some analysts think so. “My concern is what happens now that we’re getting to these price-highs where we’ve typically seen a supply response,” Rob Haworth, at U.S. Bank Wealth Management in Seattle, said in a Bloomberg interview. “Fundamentally, you should see a supply response and that’s going to make it tougher for these bulls to hang in there.”

But there are a lot of cracks in the U.S. shale complex that have been exposed over the past year. The Permian basin, which boasts some of the lowest production costs out of all U.S. shale basins, has seen an uptick in costs, a bottleneck of labor and services, and even some production problems. More recently, the rig count has started to decline as companies realize that their growth plans are often capital destructive. Shareholders in U.S. E&Ps are demanding change, pushing for shifts in executive compensation and an end to a growth-at-all-costs mentality.

In other words, U.S. shale might not add another tidal wave of new supply even if oil prices rise further, and shale output could undershoot a lot of the growth scenarios. Because those forecasts are some of the most influential bearish forces on oil prices, holding back benchmark prices from rising, the fact that U.S. shale might disappoint means there’s actually more room on the upside for oil prices.

Nick Cunningham is a freelance writer on oil and gas, renewable energy, climate change, energy policy and geopolitics. He is based in Pittsburgh, PA.