Protectionism across the globe reached a record high last year due to new barriers designed to restrict trade into China and the United States, according to a report by the European Commission published on Monday. 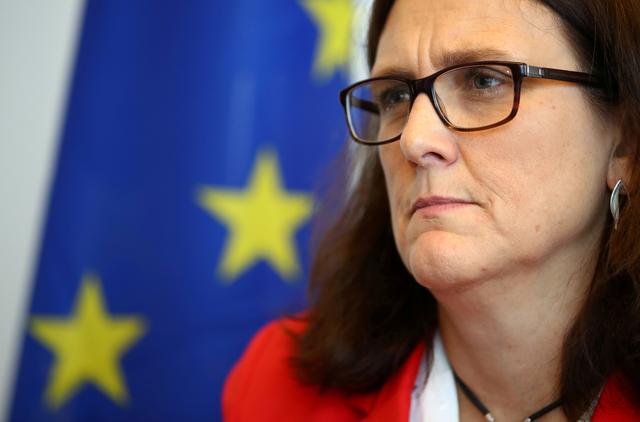 The Commission’s Trade and Investment Barriers Report said that 23 non-EU countries had put in place 45 new trade barriers in 2018, bringing the total number to a record high of 425 measures in 59 different countries.
China and Russia had the most “problematic” trade measures overall, with 37 and 34 respectively, the report said.
Last year, most barriers were erected in China and Algeria, with five each, followed by the United States and India, both on four, with the greatest impact on the IT sector and precious and non-precious metals.
“Globally we see an increased threat of protectionism, notably from China and the U.S. and that is very worrying,” EU Trade Commissioner Cecilia Malmstrom told a news conference.
“This is unfortunately a global trend and we don’t see an end to it on a short-term basis,” she added.
The United States for example imposed 25% tariffs on incoming steel and 10% on aluminum a year ago, while China restricted trade with rules on cybersecurity protection and food regulation, the EU report said.
India had for example introduced a requirement for veterinary certificates for imported leather goods, while Algeria had imposed an import ban on close to 900 products, Malmstrom said.
Overall, the new barriers put in place last year had affected or risked affecting 51.4 billion euros ($57.8 billion)of EU exports.
However, the report did find that 123 foreign measures had been eliminated since the start of the current Commission in 2014, leading to 6.1 billion euros of extra EU exports in 2018.