The raging opposition to the Central Bank of Nigeria’s plan to redesign and replace N200, N500 and N1,000 banknotes effective December 15 may have been silenced at last as President Muhammadu Buhari on Sunday threw his weight behind the plan.

The president said he was convinced by the reasons given to him by the CBN that the economy would benefit from the banknotes redesign in terms of reducing inflation, currency counterfeiting and the excess cash in circulation.

The plan, which was announced last week Wednesday by Godwin Emefiele, CBN governor, has since then been hotly debated, with many economic experts and analysts expressing opposing views.

Even Zainab Ahmed, minister of finance, budget and national planning and head of Nigeria’s fiscal management, had told the Senate Committee on Finance on Friday that she and her ministry were not carried along by the CBN in arriving at that decision.

She said even though one of the reasons the CBN cited for the decision was to manage inflation, she was sure there would be consequences, adding, “And I don’t know whether the monetary authorities have actually looked very closely at what the consequences and how they will mitigate it.” 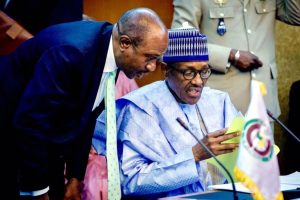 But speaking in a Hausa radio interview on Sunday, Buhari said the CBN’s decision to launch new designs and replace high value naira notes was for the good of the economy and had his support.

“People with illicit money buried under the soil will have a challenge with this but workers, businesses with legitimate incomes will face no difficulties at all,” Buhari said.

He said he did not consider the three-month window for migrating to the new notes too short.

Buhari spoke with renowned journalist, Halilu Ahmed Getso, and Kamaluddeen Sani Shawai, according to a press release issued on Sunday by Garba Shehu, presidential spokesman. The interview will be aired Wednesday morning on Tambari TV on Nilesat, Shehu said.

Buhari’s position confirms CBN’s earlier stand, as communicated by Osita Nwanisobi, director of corporate communications, on Friday, that the apex bank, in line with provisions of section 2(b), section 18(a), and section 19(a)(b) of the CBN Act 2007, had duly sought and obtained the approval of the president in writing to redesign, produce, release and circulate new series of N200, N500, and N1,000 banknotes.

Nwanisobi, addressing journalists in Abuja apparently in response to Finance Minister Ahmed’s criticism, had insisted that some persons were hoarding significant sums of banknotes outside the vaults of commercial banks, a trend which, he said, should be discouraged by anyone who means well for the country.

Furthermore, he had noted that currency management in the country had faced several escalating challenges which threatened the integrity of the currency, the CBN, and the country, adding that every top-rate central bank was committed to safeguarding the integrity of the local legal tender, the efficiency of its supply, as well as its efficacy in the conduct of monetary policy.

He had also assured Nigerians that the currency redesign exercise was purely a central banking exercise and not targeted at any group, expressing optimism that the effort would, among other things, help to curb the incidents of terrorism and kidnapping due to access of persons to the large volume of money outside the banking system used as a source of funds for ransom payments, and deepen Nigeria’s push to entrench a cashless economy in the face of increased minting of the eNaira.