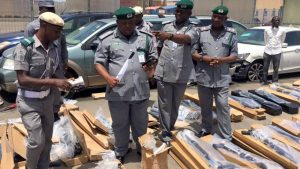 Nweke, head of department at Sea Empowerment and Research Centre Limited, made the assertion in an open letter to President Muhammadu Buhari, in which he advised the Nigerian leader not to approve a purported move to reintroduce the pre-shipment inspection of imports as part of a fresh plan to modernise and digitalise the Customs.

There was a reported call from some industry quarters for the reintroduction of the pre-shipment inspection, a system that was dumped in 2013 over alleged trade malpractices for the DI, which is currently managed by Nigeria Customs Service for inspection of importations.

The frontline trade expert called the call for return of pre-shipment inspection as “a gang up to concession the e-Customs modernisation by some unpatriotic elements fronted by their foreign collaborators.”

According to Nweke, the total one percent CISS ( or scanning fee) collected and saved for the government by the Nigeria Customs Service from 2013 to September 2019 hit N368.7 billion, which would have been lost under the pre-shipment inspection regime.

He posited that with the DI, Nigeria Customs had taken back its traditional core functions, in relation to handling classification, valuation, examination under the PAAR regime and had saved the Nigerian government the above amounts that were earlier exploited and collected by the inspection agents as one percent CISS fees and yearly contract service fee.

“We implore you to please use your good offices to stop the growing gang up to concession the e-Customs modernisation by some unpatriotic elements fronted by their foreign collaborators.

“ The Nigeria Customs Service has come of age, and shown cause that it can administer itself if allowed to do so and supervised with a right attitudes. All that is required in this regards, is to bond over ( via a clearly spelt out performance indicator undertaken) and then appoint Career Customs Officer to pilot the affairs of the Service. As may be spelt out in the performance undertaking, such career officer, must undertake to instill and boost professional discipline, reinvigorate the Services with highly spirited and patriotic workforce,” he asserted in the letter tittled, “Endless gang up, increasing appetites to access and amass easy wealth through the government by foreign firms.”

“For the umpteenth time, permit to reinstate that, the incessant recourse by the past administrations to short changing the Customs work via Concession or out sourcing, owing to the pressure from some unpatriotic elements and their foreign collaborators, to say the least, retards sustainable national economic development and stampedes the Customs professionalism and modernisation drives,” the trade experts noted.