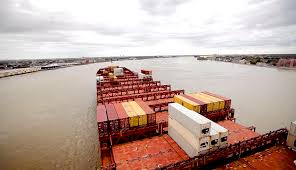 Under the deal with an unidentified customer, Daewoo Shipbuilding will deliver the vessels by August 2021, the shipbuilder said in a regulatory filing.
Daewoo Shipbuilding posted sales of 4.2 trillion won and an operating profit of 394.4 billion won in the first half of the year.
Meanwhile, the country’s big three shipbuilders are scrambling to secure more deals to overcome a series of skeptical outlooks on their 2019 earnings as the end of the year is nearing. The three shipbuilders are DSME, Hyundai Heavy Industries (HHI) and Samsung Heavy Industries (SHI).
According to industry sources, the three shipbuilders are receiving a growing number of orders since the third quarter of the year. Of them, SHI is drawing attention for clinching a series of big deals.
SHI said Thursday it inked a deal worth 485.3 billion won ($405 million) to build two 174,000-cubic meter liquefied natural gas (LNG) carriers for Malaysia International Shipping Corporation.
The latest order came after its Tuesday announcement that the shipyard also signed a 1.1 trillion won worth of order to build six 23,000-TEU container ships from Taiwan’s shipping company Evergreen Line. The 23,000-TEU container ship will be the world’s largest container ship when it is built.
With the two orders above, SHI has clinched deals for 37 vessels valued at a combined $5.4 billion so far this year, achieving 69 percent of its annual order target of $7.8 billion. The figure is higher than the remaining two Korean shipyards.
HHI also said it has achieved 48 percent of the shipyard’s annual order target, with its latest deal worth 676.6 billion won with the Defense Acquisition Program Administration (DAPA) to build a next-generation Aegis destroyer of the Korean Navy.