The bulls made a return to the domestic equities market Tuesday to reverse Monday’s loss following buying interest in Dangote Cement (+5.6%), Dangote Sugar (+1.6%) and UBN (+1.8%).

As a result, the NSE All-Share Index (ASI) advanced by 0.83 per cent to 30,733.47 points. Similarly, investors gained N132.8 billion as market capitalisation advanced to N16.1 trillion and the market year to date (YTD) return improved to 14.5 per cent. 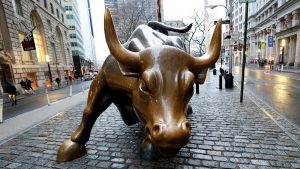 Performance across sectors was mixed, although positively skewed as three indices gained, two lost, while the AFR-ICT index closed flat. The Industrial Goods index led the gainers, up 2.9 per cent due to buying interest in Dangote Cement (+5.6%) and CAP (+9.6%).

The NSE 30 Index increased by 0.94 per cent to close at 1,329.19 points as against 1,316.82 points the previous day. Market turnover closed with a traded volume of 253.28 million units. Dangote Cement and FCMB were the key gainers, while Custodian and Guinness were the key losers.

At the street market in Lagos, the Nigerian naira maintained its bid at N463 for the second straight day this week, while it weakened by 0.10 per cent I&E FX market as the dollar was quoted at N386 as against the last close of N385.63 with most market participants maintaining bids between N383 and N393.49 per dollar.

Also, the NT-Bills secondary market closed on a flat note with average yield across the curve remaining unchanged at 0.52 per cent. However, the average yields across short-term, medium-term, and long-term maturities closed at 0.37 per cent, 0.85 per cent, and 0.46 per cent, respectively.

In the OMO bills market, the average yield across the curve declined by 7 basis points to close at 0.42 per cent as against the last close of 0.49 per cent. Buying interest was witnessed across short-term maturities with the average yield falling by 14 basis points. However, average yields across medium-term and long-term maturities remained unchanged at 0.49 per cent and 0.63 per cent, respectively. Yields on 9 bills declined with the 24-Nov-20 maturity bill recording the highest yield decline of 29 basis points, while yields on 16 bills remained unchanged.

NIRSAL reacts to claim of non-disbursement of funds, restate commitment to mandate