Aliko Dangote, Africa’s richest man and President of Dangote Group, Thursday lamented that 60 per cent of the people in the North live in extreme poverty. 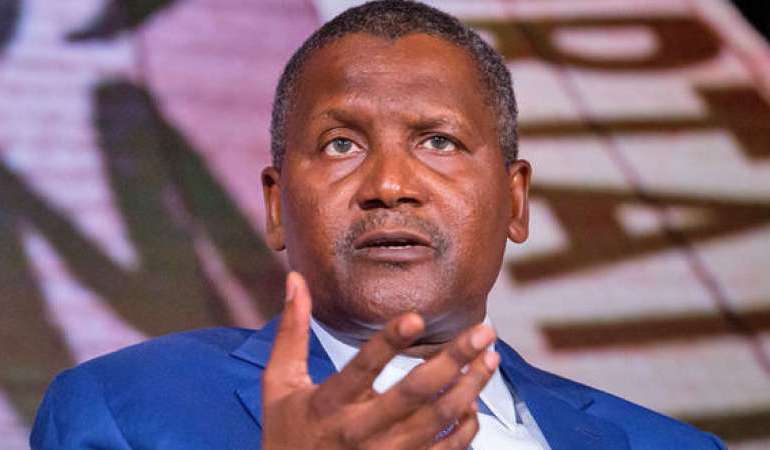 He charged the governors of the 19 northern states to wake up from their slumber and tackle the high rate of poverty in their region.
Dangote, who threw the challenge in a keynote address he delivered at the 4th edition of the Kaduna Economic and Investment Summit (KADInvest 4.0), said the 19 northern states, which account for over 54% of the country’s population and 70% of its landmass, collectively generated only 21% of the total sub national internally generated revenue (IGR) in 2017.

He said it was unacceptable for the people to continue to live in extreme poverty when they have so much resources, including a large expanse of arable land, upon which agriculture could flourish and create wealth for all.
He urged the governors to sit up and roll up their sleeves in order to pull the region from its current economic woes.

Speaking on the theme of the summit: “Expanding Investment Frontiers,” Dangote said the governors should develop policies and programmes that could trigger private sector investment and job creation.
According to him, once there were jobs, poverty and other social vices bedevilling the North would reduce drastically.
He strongly advised the governor to invest in agriculture, saying it would certainly generate more revenue to the region than oil has generated for Nigeria.

His words: “The North must focus on harnessing its massive agricultural potentials in terms of both production and processing. No region with such agricultural potentials should be this poor.
“We have what it takes to turn around our fortunes and I pray all the 19 governors of the northern states will wake up and follow the footsteps of Kaduna State government.
“Given the vast tracts of arable land and conducive condition, I think in the next 10 years, agriculture can generate more revenue and prosperity than oil that we have now if we have the right commitment.”

He also tasked the governors to identify their areas of comparative advantage over other regions, adding that provision of information and data on what is available in various states was very necessary in planning for the future.

“Nigeria is bedevilled by many developmental challenges, but with abundant human, capital and natural resources, we should have made appreciable progress. Our country’s human developmental indicators rank poorly when compared with global averages. Nigeria is ranked 157 out of 189 countries in the areas of human development index. While all social economic considerations in the country are a cause for concern, the regional imperatives are in fact very alarming.

“In the North Western and North Eastern part of Nigeria, more than 60% of the population lives in extreme poverty. It is instructive to know that the 19 northern states, which account for over 54% of the country’s population and 70% of its landmass, collectively generated only 21% of the total sub national internally generated revenue in 2017.
“Northern Nigeria will continue to fall behind if respective state governments do not move to close the development gap and closing this gap requires multi-layer investment and government will not be able to muster the needed funds.
“Only private sector can raise the amount of capital required to find the kind of investment required. Government must create a conducive environment that will trigger a huge inflow of more private capital into the private sector of the economy. Private investment will create jobs and will go a long way to erase the challenge of unemployment and poverty.

“As more people get employed, you will notice a sharp decline in some of the social vices now prevalent in our society. Kaduna State is a shining example of this,” he said.
Dangote observed that while several states were taking steps in this direction, only a few like Kaduna are making visible progress.

He commended Governor of Kaduna State, Mallam Nasir el-Rufai for his initiatives and urged his colleagues to follow his footsteps.
Kaduna currently has the highest WAEC pass rate in the North and second highest IGR generation in the northern part of the region after Kano.

At the event, el-Rufai unveiled plans to make the Kaduna State economy ICT driven.
The governor said that his administration would incorporate ICT in every activity, including governance, agriculture, manufacturing and education.
El-Rufai further said that plans were underway by his administration to make Kaduna the ICT hub of Northern Nigeria.

According to him, the state government is already partnering Microsoft and Google to invest in the development and provision of state-of-the-art ICT services.
He explained that KADinvest 4:0 was expected to develop new investment frontiers in the state.

“Our main objective is to present an industrialization plan, and to improve the investment portfolio size.

“We also want to align the Kaduna infrastructure and industrial master plan to achieve sustainable development,” he said.

El-Rufai further stated that part of the focus of the KADinvest 4:0 summit was to develop the economy through the revamping of industries.

The governor also said that the summit targets to achieve 32 per cent GDP growth as well as 40 per cent increase in the agriculture sector share of the overall GDP.

According to the governor, the state textile industry will be enlivened following the industrial revamping plan, saying, “We are working with the Federal Government to remove the bottlenecks that led to the collapse of the industries.”
El-Rufai, who said the Kudeden Power Plant would be on stream before the end of the year, added that a large percentage of electricity would be available to serve the textile industry.