Dangote Cement paid the sum of N35.095 billion to repurchase its own shares from its shareholders at the conclusion of the second tranche of its share buyback programme, according to a regulatory disclosure the company filed at the Nigerian Exchange (NGX). 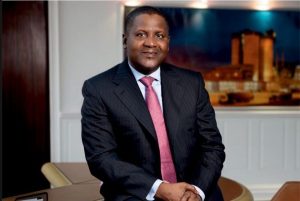 It had previously announced the second tranche of its share buy-back programme on 12 January 2022.

A share buy-back is carried out when the management of a quoted firm considers the company’s shares undervalued and thus, reduces the number of outstanding shares which will, in turn, lead to an increase in both the share price and demand for the shares in the marketplace.
During the buyback programme, the company mopped up a total number of 126,748,153 ordinary shares of the company in the repurchase programme, a figure that represents 0.74 percent of its issued and fully paid ordinary shares.