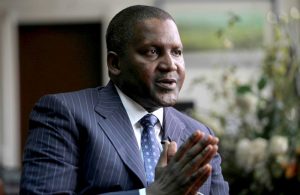 In a statement issued Wednesday by Anthony Chiejina, the chief corporate communications officer (CCCO) of the Dangote Group, the Africa’s richest man described the move as a proactive one, which is capable of elevating Nigeria’s economy to greater heights.

According to him, “The constitution of the Economic Advisory Council is a proactive move, by putting together tested and respected patriots, who are independent and always ready to put the country’s interest first and ahead of themselves.”

Dangote urged the federal government to take advantage of this rare opportunity to strengthen the economy and put the country on the path of growth, job creation and competitiveness.

He also called on all stakeholders to work with the federal government to revive and restore the economy on the path of growth.

In the same manner, the ‎Emir of Kano, Muhammadu Sanusi II, ‎has also praised the president on his choice of members of the council which he described as comprising first-rate ‎professionals and academics.

Sanusi gave the commendation on Wednesday in Kano while briefing journalists at his Palace.

The emir, ‎who described the new council as “first class”, said the move was “timely and reflective of Buhari’s determination to re-energise the management of the economy.”

He said Nigerians were highly desirous of such an effective and knowledge-driven team to provide the lead on the economic front.

He said the beauty of the team, apart from the pedigree of its members, is their private sector experience and their independence.‎

A statement signed by the special adviser to the president on media and publicity, Femi Adesina, which introduced members of the council, also stated that the council would advise the President on economic policy matters and would report directly to his office.

The Council will be expected to also advise Buhari on fiscal analysis, economic growth and a range of internal and global economic issues working with the relevant cabinet members and heads of monetary and fiscal agencies.

In addition to this, the EAC will have monthly technical sessions as well as scheduled quarterly meetings with the President.