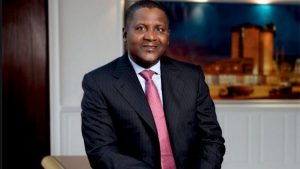 Aliko Dangote, president of the largest West African indigenous industry, confirmed this in a statement at a recent event held in Lagos.

The business magnate said the Dangote Cement company with an installed capacity of 29.3Mta will soon become an expanded entity in Cameroon, Central Africa.

According to him, it is crucial for Africa to deliberately improve its per capita cement consumption to aid infrastructure development by revitalising further demand which will help force down the cost of cement.

He stressed that the desire for the continent’s self-sufficiency in cement production spurred the company’s $4.34 billion pact with Chinese construction giant, Sinoma International Engineering Company Ltd.

The contract, he explained, is for the construction of 11 new cement plants in 10 African countries and also, Nepal in South Asia.

Dangote also added that the transportation of goods like cement by road from production point in Nigeria to other parts of Africa where there is a big market is becoming unfeasible, hence the need to establish manufacturing plants in those regions of the continent.

On his part, Devakumar Edwin, the company’s group executive director, stated that the transportation of products via road was expensive.

He added that the governments of Togo and Benin Republic had complained of the pollution that the trucks brought to the environment as well as the import tolls incurred.

According to Edwin, the establishment of the Doula plant in Cameroon will enable the company to double its capacity in Yaoundé, the country’s capital city with a target of three million tonnes in the country to check competition as well as earn foreign exchange.

He explained that the company’s desire to boost investment with the Phase 2 project is based on not only the fast growth rate of the Cameroonian economy but also due to the warm welcome extended to the company and the enabling environment created by the Cameroonian government.

Speaking on why the company chose Cameroon for the multi-million-dollar project, he stated that the investment is a strategic one because it is the largest economy in Central Africa and is well endowed with abundant natural resources, political stability, adequate security and growing infrastructural development.

Also speaking at the event, Gabriel Ndocke, the Cameroonian minister of Mines, Industry and Technological Development commended the proposed manufacturing plant in the country which he described as a laudable initiative. He stated that since the introduction and transportation of Dangote Cement into Cameroon, accessibility to cement products, price and quality has become more enhanced.

He added that the impact of the company on the economy was huge as it has thrown the market open unlike before when the Central African country had just one investor.

Ndocke also expressed pleasure that cement could be gotten everywhere while the price is accessible for everyone and in addition, creating job opportunities for the people.