Banks in Italy and other peripheral euro zone countries are grabbing tens of billions of euros in idle cash from their rivals in Germany and the Netherlands to benefit from a European Central Bank bonus rate, ECB data showed on Tuesday. 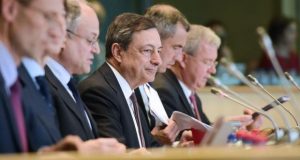 The data, published in a presentation by ECB board member Benoit Coeure, pointed to some revival in lending between banks in different euro zone countries, which had languished for almost a decade, since the ECB introduced a so-called tiered rate on deposits on Oct 30.

This exempts lenders from an ECB penalty charge on a portion on their excess reserves, giving them an incentive to trade that cash with others so to use up all the allowance on offer and maximise the benefit.

“On the first day of operation of the two-tier system, we observed a considerable redistribution of excess liquidity, often away from liquidity-flush countries such as Belgium, Germany and the Netherlands and toward countries with unused allowances, such as Italy,” Coeure said in a speech.

Italian banks saw their excess liquidity jump by some 50 billion euros on the day the tiered rate was introduced. German, Dutch and Belgian banks all saw their own levels go down.

He added that the largest increase in volumes was to be seen in repurchase agreements, where cash is swapped for collateral such as government bonds, while unsecured lending remained muted.

While Italian banks were already making full use of the opportunity, their peers in smaller countries and even in Germany were struggling, Coeure said, suggesting cash remained unevenly distributed.

Furthermore, companies and foreign banks, which account for the bulk of money-market transactions in the euro zone, do not have access to the ECB’s deposit facility, stopping them from benefiting from the tiered rate

All this meant the ECB may have to leave the money taps open for longer to ensure rates stay low or even open up to deposits beyond euro zone banks, Coeure said.

“This calls for central banks to err on the side of caution and leave a sufficient buffer in the financial system with a view to forestalling risks of unwarranted upward pressure on short-term interest rates,” Coeure said.