By Hope Ikwe, in Jos
Mohammed Hayatudeen, the economist and well regarded Nigerian technocrat who is gunning for the presidency of the country under the opposition People Democratic Party (PDP) has been talking up his experience as an economist as being useful in the pursuit of his presidential ambition. 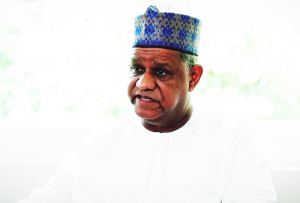 Hayatudeen, a former group managing director and chief executive of New Nigeria Development Company, who has served as chairman and director in various organisations, while addressing party delegates at the PDP secretariat in Jos, Plateau State, said: “I will bring my credentials to the job, I feel I have come to the stage where I can offer service to Nigeria.”
Acknowledging the myriad of problems Nigeria is faced with, such as political and security challenges, said these challenges need to be tackled for Nigeria to function at its peak and for citizens to be empowered to achieve their potentials.

The presidential aspirant, who said that he became the group managing director and chief executive of New Nigeria Development Company at the age of 30, reiterated that he had the experience to successfully rule Nigeria as he stated that he will focus on food security, access to basic need of life and energy when elected president come 2023.
He further stated that he will ensure that Nigeria diversifies her source of energy as he noted that: “this country is a large gas producer that can utilise gas for power generation.”
Businessamlive Website Stats