Nigeria’s minister of science, technology and innovation, Olorunnimbe Mamora, has expressed satisfaction over the establishment of an automobile assembly plant by Nord Automobile Limited inside the University of Lagos. This is the first of its kind in the country. There is also collaboration between Nord and the Nigerian Airforce to use the new assembly facility to produce drones. 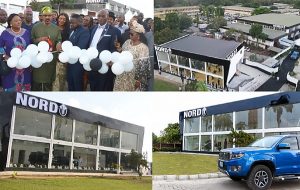 He commended the partnership between the university and Nord during the official opening of the multi-purpose automobile complex in Lagos last week, describing the initiative as “a demonstration of abundant innovative energy of the youths of this country”.

Mamora said the project was in line with the motive behind President Muhammadu Buhari’s recently signed Executive Order 5, “which essentially has to do with indigenous components across all sectors of the economy. That is what we are putting into practice. And this project is part of that.”

Speaking on drone technology, the minister said, “This is relevant in many areas even in delivery of drugs and in the area of security. It can be used to gather information that will be needed to move forward.”

He promised the support of the ministry to ensure the sustainability of the venture, stressing that such partnership was needed for the economic growth of the country.

“The opportunity you have provided our youths and the general citizenry by setting up this assembly plant here in Lagos is greatly appreciated by us. This is in line with the goal of our administration of providing conducive business environment for the good people of the state to operate,” the commissioner stated.

Oluwatoyin Ogundipe, a professor and outgoing vice-chancellor of the University of Lagos, said the university decided to sign a Memorandum of Understanding with the Nord team having found out the immense benefits of the project to the school.

“We entered into an MoU with Nord so that our students can get their training through this platform; the academic staff too can get their exposure through this platform. It is not only the staff in the faculty of engineering that will benefit from this, even those in the departments of architecture, finance, marketing and every other department that has relevance to this project,” he said.

Ogundipe said with the inauguration of the automobile assembly complex, the university would now start assembling cars, buses and other vehicles, depending on the demand.

The vice chancellor, whose tenure ended the same November 10, 2022 when the Nord facility was inaugurated, also said microfinance banks would collaborate with the team so that any member of staff that needed a new car could now approach the MFB, have an agreement with them and pay the money in instalment.

“We are going to be manufacturing drones in this same place. They already have an agreement with the Nigerian Air Force. And I want us to know that our students will learn something new in this area of drones and other things that will come from this particular arrangement,” he said.

Ogundipe expressed hope that very soon the new facility will be recognised all over the world.

“This will be the first time that a Nigerian university in Africa will be having an automobile-making company in such a way that it will train our students, expose our staff to practical skills and also make our staff to get new cars at affordable prices,” he said.

Oluwatobi Ajayi, chairman/CEO of Nord, said the new automobile complex, which he called the end-to-end of automobile business, comprised the research & development centre, the manufacturing and assembling point, the showroom, and the after-sale centre.

“Some of the things we intend to achieve here include to research and develop world-class auto technology. Research and development are the bedrock of advancement in technology. We need to take it seriously. This is better achieved in the university. And what better university can we have than UNILAG, right in the middle of town with brilliant students and lecturers and facilitators around here working with our team. This must be a marriage made in heaven,” Ajayi said.

He explained that as a country with a large population and high gross domestic product, Nigeria cannot continue to import what it uses, including vehicles.

“We need to have a nationalistic view about things by being industrialised. Europe, the United States and China have become powerful today because of their industrial powers. The auto industry is the mother of all industries. It is the industry upon which other industries thrive,” he said.