The United Nations World Food Programme (WFP) has announced the departure of the first maritime shipment of Ukrainian wheat grain from the Pivdennyi port, a commercial seaport in the Ukrainian city of Yuzhne, on the Black Sea coast. 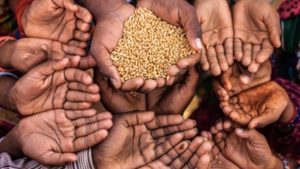 The shipment of 23,000 metric tonnes of wheat grain, according to the international humanitarian organisation, is an emergency response to the Horn of Africa where the threat of famine has raised concerns over the sustenance of the people located in the drought-hit region.

The WFP described the region as one of many areas around the world where the near complete halt of Ukrainian grain and food on the global market has made life even harder for families already struggling with rising hunger.

The humanitarian operation is also regarded as another important milestone in efforts to get much-needed Ukrainian grain out of the conflict-hit country, back into global markets, and to countries worst affected by the global food crisis.

The WFP’s wheat shipment in response to the global food crisis was financially supported through a collaboration between the private and government sector including the USAID’s bureau for humanitarian assistance, as well as significant contributions from Howard Buffett, a long-time WFP supporter, and the Australian philanthropic organisation of Andrew and Nicola Forrest.

David Beasley, WFP executive director, in his remarks, said getting the Black Sea Ports open is the single most important thing the organisation can do right now to help the world’s hungry.

“It will take more than grain ships out of Ukraine to stop world hunger, but with Ukrainian grain back on global markets we have a chance to stop this global food crisis from spiraling even further,” Beasley added.

With the resumption of commercial and humanitarian maritime traffic in and out of Ukraine’s Black Sea Port, it is expected that some global supply disruptions will ease with relief for countries facing the worst of the global food crisis. It will also allow Ukraine to empty its grain storage silos ahead of the summer season harvest.

Despite the positive developments in the global markets, the WFP noted that the world is still in danger of an unprecedented food crisis. It stated that immediate action is needed to bring together the humanitarian community, governments, and the private sector to save lives and invest in long-term solutions.

“Failure will see people around the world slip into devastating famines with destabilising impacts felt by us all,” the humanitarian aid organisation warned.