Cultivation of the aquatic territory is becoming increasingly relevant and it is no wonder analysts have described it as one of the fastest-growing agro-industrial activities in the world. 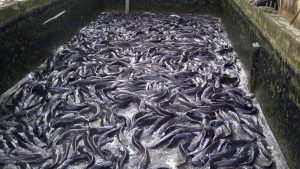 This statistic is also supported by the Food and Agriculture Organisation (FAO), which rated fish farming as one of the most rapid agro-industrial activities in the last four decades, projected to outpace population growth.

Renowned for its rich protein/dietary content and relative affordability, fish serves as one of the most widely consumed foods in the world, possessing a consumption rate that keeps soaring.

The aftermath of the covid-19 pandemic has led to a global economic meltdown and Nigeria is not left out of the financial implications as many businesses have been rendered redundant, the spate of unemployment has also increased capped by inflation in the economy. However, as many Nigerians conceive plans towards business and wealth empowerment prospects in the post-covid-19 era, fish farming is gearing towards presenting a feasible prospect of an economic turn-over.

According to Science Daily, an insightful research website, fish farming is the process of raising fish commercially in tanks,ponds and several other enclosures notably as a food source and also as a commercial activity.

The Animal Welfare Institute describes fish farming as the fastest growing area of animal food production and further disclosed that today, about half the fish consumed globally are produced through this artificial method of fish production.

Fish is currently the cheapest source of animal protein consumed by the average Nigerian and, according to nutrition experts, it accounts for about 50 per cent of total protein intake.

Statistics from Researchgate.net, a research oriented online platform showed that Nigeria imports about 72 million tonnes of frozen fish valued at $500 million annually. Nigeria is also rated as Africa’s highest importer of seafood. This is an indication that the consumption rate of fish in the most populous black nation is very high, providing a large market opportunity for fish farming to thrive.

Fish farming is a budding industry which has the potential to flourish and meet up with the large deficit between fish production and consumption in Nigeria, if properly exploited.

A report by the Federal Department of Fisheries (FDF),an agency under the Federal Ministry of Agriculture and Rural Development (FMARD)disclosed that  the Nigerian coastline has huge potential for inland and offshore fish farming.

The fishery department also stated that asides increasing the availability of food fish, especially in the coastal areas, it offers commercial prospects for sustainable fish farming business in Nigeria.

According to Olagunju Daniel, a fish farmer based in Lagos, the fish farming industry does not require a huge capital to invest as it can be started with less than N50,000, providing a breakthrough for the poor who have few alternatives and resources to start a sustainable business.

“Fish farming does not require being typically wealthy. It is a business that absorbs the poor as well as the wealthy. All that is required is interest and dedication to the business,” Daniel stated.

The fish farmer also noted that the profit generated from fish farming is very high because fishes have a high production capacity. He disclosed that the market demand for catfish, which he invests in, is high and he makes as much as N150,000 per month, excluding feeding costs and other expenditures.

In the past few years, catfish has become the dominant fish culture in Nigeria and is currently responsible for the major aquaculture output of the country, giving Nigeria a niche in the global aquaculture production sector.

According to the Food and Agriculture Organisation, Nigeria currently ranks as the highest producer of African catfish (clariasgariepinus), as well as in the world, a springboard for economic resuscitation if giving the needed attention.

In Nigeria’s coastal regions, the introduction of the cage culture system, a fish farming method that confines the fishes in a mesh enclosure to encourage their rapid population growth, is also a flashpoint of the economic value of fish.

Concurrently, fish farming has become a highly regarded industry in the country with catfish, tilapia and prawn being the most popular fish species being reared.

Challenges of fish farming in Nigeria

Though the production of freshwater fish culture is widely accepted andencouraged, the Nigerian fish farming industry has not been “all rosy” business as a result of many challenges inflicting the industry.

The Federal Fishery Department reported that Nigeria has not been spared from natural hazards that have included flooding, drought and the global financial crisis. These have resulted in the destruction of numerous fisheries and severe impacts on the development of the sector.

The department also revealed that of the over 210 species of fishes in Nigerian water bodies, little fraction of them are receiving cultivation attention from fish farmers. While the popular fish species such as the catfish and tilapia keep blossoming in the markets, reverse is the case with many other species whose abandonment has led to a gradual extinction.

OlumideAgbesola, chief executive officer (CEO), Maymid Farm Limited, also bemoaned the fact that that many fish farmers in Nigeria do not seek professional consultation before erecting their fish ponds leading to unforeseen losses.

Hassan Mindu, founder, Myra Fish Farm,Nasarawa State, first tilapia fish hatchery in Nigeria, suggested that people should be encouraged to patronise local fish farmers.  He further stated that sensitisation and enlightenment programmes on how to breed fishes should be encouraged by fish farming associations whereby experts would teach local fish farmers on the best fish farming practices.  He also stressed that the government should support these programmes and actively participate in implementation of fish farming development projects.Mindu also encouraged the government to patronise fish farmers like him for fingerlings to replenish the fish stock in the water bodies.

Lamina Arubiewe, a lab technologist and fishery expert at the Department of Agricultural Science, AdeniranOgunsanya College of Education, believes fish farming business is viable from all indications. He however noted that more effort is required from both the public and government to increase its local production and bridge the gap between fish demand and supply in the country.

He suggested that besides the commonly cultured fresh water catfish and tilapia, several other marine shell and fin fish species can also be cultured.

Arubiewe also talked about the need for fish farming to improve in terms of technological innovation and adaptation so as to meet changing and challenging environment.