Germany has narrowly avoided a technical recession after it posted flat growth in the fourth quarter, raising concerns that Europe’s largest economy is continuing to slow down. 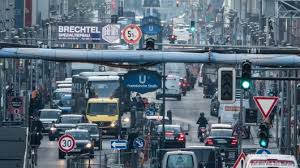 Preliminary data showed growth of 0.0 percent in the fourth quarter from the previous quarter, Germany’s federal statistics office Destatis said Thursday, below a Reuters forecast of 0.1 percent..
Destatis added that “positive contributions” in the fourth quarter came from domestic demand “however, development of foreign trade did not make a positive contribution to growth in the fourth-quarter.”
The latest growth data from Germany come after a period of domestic tumult, particularly for its beleaguered car industry, and global concerns over trade, import tariffs and growth.
The flat fourth quarter data shows that Germany has narrowly avoided a recession – defined as two consecutive quarters of declining growth. It does not bode well for Europe, however, which sees Germany as a traditional growth driver in the region.
“After a dynamic start into the first half of the year (+0.4 percent in the first quarter, +0.5 percent in the second quarter), a small dip (-0.2 percent in the third quarter, 0.0 percent in the fourth quarter) was recorded in the second half of the year. For the whole year of 2018, this was an increase of 1.4 percent,” Destatis said.
The year 2018, which started off with expectations of the best growth performance since 2011, “ended with a big stinker,” Carsten Brzeski, chief economist at ING Germany, said following the flash data.
“The German economy escaped a technical recession with the smallest margin possible,” Brzeski said in a note Thursday in which he noted that “the black eye just got blacker.”
Brzeski put the weak performance of the German economy in the second half of the year down to “too many one-offs, surfacing structural weaknesses and external uncertainties.”
“Just think of cars, low water levels in main rivers, the trade conflict between the U.S. and China, Brexit or the lack of investment in digital and traditional infrastructure, delays of railways and airlines as well as hardly any significant new structural reforms in the last ten years. What a list! However, it is still not necessarily the end of a long positive cycle,” he said.
“The upside from today’s data is that it can hardly get worse. Economic fundamentals remain solid and from here on, chances of a (gradual) rebound are still much higher than chances of yet another disappointment.”