Global: It was a week of selloffs across the global space, as recession concerns mount due to a broad-based rise in inflation across the globe, weighed on markets. Starting in the Asian-pacific region, a slowdown in the region’s largest economy China, weighed in investor sentiment following the release of its Q2’22 GDP figures. The Chinese economy saw GDP fall 2.6% in q/q, while industrial output failed to meet analyst expectations. On the currency front, the Japanese Yen weakened to a 24-year low against the dollar, as global growth fears boosted USD demand. Meanwhile, on the equities front, the Hang Seng was the worst performer in the region, sinking 6.57% w/w, while the Nikkei 225 gained 1.02% driven by a weaker yen. Moving to the eurozone, energy prices remain at the forefront of investors’ concerns, with all major markets closing in the red. Markets plunged this week as inflation outlook for the region worsened, while the political uncertainties in Italy and the U.K. further dampened sentiment. According to the European Commission, Average yearly inflation is expected to reach record highs in 2022, at 7.6% in the euro area and 8.3% in the EU, before falling in 2023 to 4.0% and 4.6%, respectively. Meanwhile, Italian prime minister Mario Draghi announced his decision to step-down, however this was move was rejected by the Italian president. For the week, the German Dax, French CAC and London FTSE lost 1.76%, 0.80%, and 0.94% respectively. Finally, in the U.S. where all eyes were on the June inflation number, markets closed lower as well as concerns of a more aggressive tightening from the U.S Fed weighed on regional indices. U.S. inflation data printed at 9.1% for June, coming in higher than analyst expectations, as a result investors were unnerved by the prospects of a more aggressive rate hike for the FED. At time of writing, the Dow Jones, SP500 and Nasdaq were down 1.23%, 2.01% and 1.59% respectively. 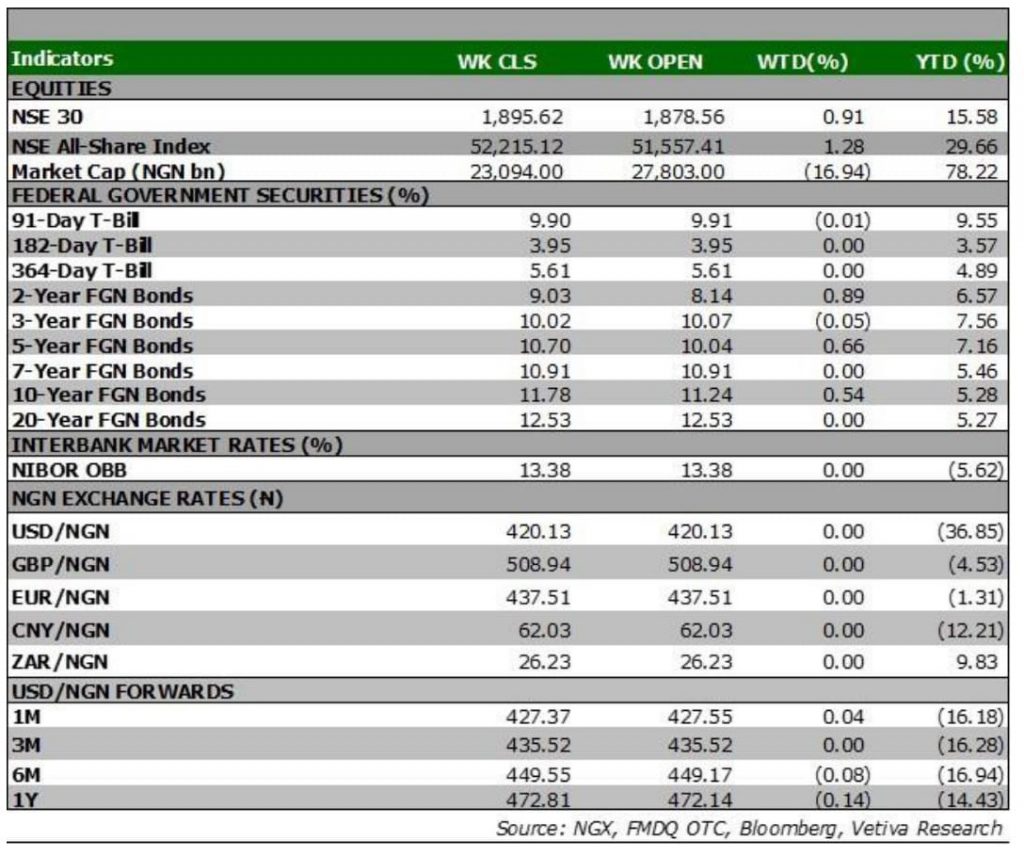 Domestic Economy: According to the National Bureau of Statistics inflation data, inflation rose for the fifth consecutive month to 18.60% y/y. This is primarily due to fuel scarcity, which resurfaced due to NNPC supply shortages and the high distribution costs of PMS (which have been inflated by the rise in diesel prices). If the scarcity continues and fuel prices rise in line with the demands of the oil marketers, we expect inflation to rise to 19.53% in July.

Equities: In a shortened trading week in the local equity space, the benchmark NGX rose 1.28% w/w, on the back of interest in the telecommunications space. A 10% rise in AIRTELAFRICA on the last trading day of the week, propelled the market higher, which saw broad-based losses across all key sectors of the market. Staring with Industrial Goods, which was the worst performer w/w, as losses in cement giant DANGCEM, saw the sector sink 3.38% w/w, with losses in BUACEMENT further weighing on this performance. Moving to the Consumer Goods sector, selloffs in BUAFOOD amongst others saw the sector since 0.30%, while in the Banking sector, profit-taking action in STANBIC and other mid-tier names saw the sector sink 0.52% w/w. Finally, it was a week of tepid gains in the Oil and Gas space, as the sector rose 0.02% w/w.

Equity market: We expect market to start off the week mixed as investors start taking position in anticipation of Q2 earnings report.

Fixed Income: To open next week, we anticipate a quiet session in the bonds space, as investors wait on Monday’s PMA for guidance. Meanwhile, we expect the NTB and OMO spaces to trade on a bearish note, given the constrained level of system liquidity.

In the first quarter of 2022, our coverage banks performed positively, albeit with some caveats. Average Net Interest Margin (NIM) of 5.6% was lower than FY’21 NIM (5.8%) and Q1’21 (6.0%). However, profitability did improve y/y, with average ROAE of 16.6%, up from 16.1% in FY’21 and 16.3% in Q1’21. Stronger interest income from loans and advances, and lower cost of risk both contributed to the improvement. This was a welcome surprise, as NPLs actually worsened to an average of 4.3% from 4.1% at full year, while loans grew by only 3.8% within the same period. Comparing loan growth y/y tells a different story. Loans grew 18% when compared with Q1’21, most of which came in the manufacturing and financial sectors. However, the banks’ increased profitability was mainly due to improvements in Non-Interest Revenue (NIR), specifically from trading income. Higher yields in the FI market drove increased trading volumes, propping up the line item which suffered for the better part of 2021. Meanwhile, digital and mobile transaction volumes continued to improve, contributing to NIR growth as well.

In H2’22, we expect higher rates to further drive NIR improvements, while risk asset repricing should bolster Interest Income. However, the kick-off of operations of the payment service banks (MoMo and Smartcash) is likely to negatively affect transaction volumes on mobile and digital channels.

The MPC finally bowed to pressure and raised the monetary policy rate by 150bps in May to fight inflationary pressures. In the near term, this will likely have a positive effect on market sentiment, specifically with regard to Fixed Income securities. The level of activity in that market will likely improve in H2, with the possibility of further rate hikes remaining should inflationary pressures persist. With government spending expected to continue at a steady pace ahead of the general elections next year, we anticipate an increase in yields to match the higher benchmark rate. The current 10-year Eurobond is trading at a yield of 11.88%, up from the 7.99% level at which it was trading at the end of 2021.

Across our coverage banks, Loan growth in the first half of the year appears to have been flat. For Q1’22, we estimate that loans across our coverage universe grew by an average of 4.1% from FY’21, down only slightly from the 4.2% growth seen in the same period of 2021. Although loans grew by an aggressive 26% y/y in 2021, in H2’22, we anticipate only moderate loan growth, maintaining our 7% loan book growth expectation for the full-year period. This is because we anticipate a cooldown in borrowers’ appetite as FI yields continue to rise. We foresee a further shift in the deployment of funds, as the cost of lending rises in tandem with policy rates, negatively impacting the real sector’s appetite for borrowing and driving banks to deploy an increasing proportion of funds to the now more favourable FI market.