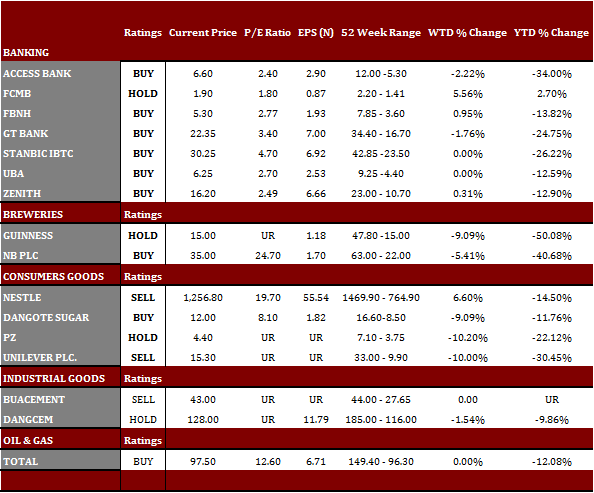 Analysts at Leads Securities have made ‘hold’, ‘buy’ and ‘sell’ calls on a number of stocks for the week in a note sent to investors and seen by Business A.M.

The market opened the week on Monday with the bulls actively helping to grow market capitalisation by as much as N16 billion to N12.968 trillion and the All-Share Index advancing by 0.12 per cent to close at 24,858.89 basis points.

The Leads analysts are advising that for this week, investors should hold alcohol and non-alcoholi beverages producer, Guinness, and that they should sell cement maker, BUA Cement and Unilever, the consumer goods company.

The analysts advanced different reasons for their calls on the stocks, including first quarter earnings performance, strength of the stocks, among others. Following below, Leads analysts provide commentaries behind their stick calls.

ZENITH: With a moderate growth in its first quarter earnings by 0.6% and stellar performances over the years, Zenith Banks remains a buy for recommendation for investors. Asset quality remains strong with an NPL ratio of 4.3%, and we do not expect a significant depreciation in near term, as its loan books have been diversified to reduce exposure to high risk sectors i.e. oil and gas sector to 14.6%.
However, we expect growth to be pressured this year, due to the outbreak of COVID 19, but with a CAR of 20%, liquidity of 41.8% and sustained cost efficiency, Zenith bank would still remain in good standing..

MTNN: MTNN continues to remain the market leader in the telecommunications sector, accounting for 38.47% of the market share. It remains a fundamentally sound stock, with impressive growth in previous years. Its first quarter earnings was impressive, with 5.6% growth in the bottom line, on the back of revenue from voice (6.14%) and significant growth in the data subscription (59%).
Consequent to the outbreak of the pandemic, we expect a significant growth in profit in the next quarter on the back of increase in revenue from voice and data subscription.

UBA: United Bank for Africa remains one of the fundamentally sound banks in Nigeria with strong branch network within Nigeria and its presence in some Africa Countries, the UK, USA and France. Reviewing Its Q1’20 result, as the bank recorded double-digit improvement across all its major income lines. Consequently, the bank grew its Gross earnings by 11.8% year-on-year growth to N147.2 billion as against N131.7 billion recorded in Q1’19.

The bank’s total assets and shareholders’ funds also advanced by 13.4% and 2.46% respectively, to N6.4 trillion and N612.6bn in the period under review, compared to N5.6 trillion and N597.9 billion recorded in Q1’19. The Bank’s PBT and PAT climbed 8.5% and 5% respectively to N32.7 billion and N30.1 billion, it also sustained strong profitability recording an annualized 20% Return on Average Equity. With a P/E ratio of 2.6x compared to its industrial average of 2.76x, this shows the stock is currently undervalued. Hence, UBA remains a BUY with Target Price of 12.90.

FBNH: We maintain our BUY recommendation for FBN Holdings with Target Price of 8.65, following a positive set of Q1’20 results, with 47% year-on-year and 6% quarter on quarter increase in net profit. Fundamentally, the bank which represents a strong portion of the holding company has shown recovering NPL levels in its recent earning fillings. we for see value over the medium to long term.

GUARANTY: GTB’s Q1’20 earnings grew modestly with PAT growing only 1.55% year-on-year to N112.86 billion and 8% growth in assets respectively. Although, we expect a slower growth in EPS over the next quarter. Given its stronger capitalization level and higher operational efficiency, the bank remains the toast of investors across investment horizon and orientation spectrum. GUARANTY remains a BUY recommendation, on the back of strong performance over the past years, sustained growth alongside remarkable cost efficiency.

BUA CEMENT: BUA Cement released its FY 2019 earnings with revenue expanding by 47.48% to N175.51billion, supported by a 53.2% increase in volumes and increased production capacity. This significant growth is attributed to the merger completion between CCNN and OBU Cement Limited. Although Profit After Tax and EPS contracted by 5.40% and 5.29% respectively, due to a deferred tax credit of N24.90billion in 2018, BUA Cement remains a buy recommendation for investors. However, we expect continuous growth resulting from the merger, as it plans to take advantage of new markets both locally and outside Nigeria. Accordingly, we recommend a SELL rating at its current price as it is closing in on its 52 weeks high.

DANGOTE CEMENT: Dangote Cement has maintained its position as the market leader in the cement industry. It has delivered strong performances over the years, making it a fundamentally strong stock and a buy recommendation for investors. Dangote Cement published its Q1 2020 earnings, with revenue expanding by 3.8% to N249.18billion and Profit After Tax increasing marginally by 0.6%. Accordingly, EPS grew by 1.7% to N3.60

NESTLE: Nestle Plc. has continued to report modest growth over the years, amidst the competitive environment of the food industry. Although its revenue and PAT declined by 1% and 12.9% respectively, we recommend a buy rating on the back of its product portfolio and cost efficiency.

GUINNESS: The brewer released its first quarter earnings which showed weak performance with revenue declining 18% and its operating expenses growing 11% to N9.43bn in Q1’20 from N8.46bn in Q3’19 pressuring the operating profit to decline 38% to N1.66bn in Q1’20 from N2.69bn in Q3’19. We anticipate the downturn in earnings to persist in Q2’20, largely due to the impact of the COVID-19. In addition, the temporary close down of bars, hotels, and other major sales point is expected to pressure topline growth and future cash flows bounded with the sustained land border closure. We also note the rising debt coupled with low liquidity position of the company, hence at current prices, the Price-to-earnings (P/E) multiple of the Company stands at 15.00x. We revise our recommendation to a HOLD.

UNILEVER: Unilever Nigeria Plc. unaudited Q1’20 results showed a 31% depreciation in revenue to N13.3bn and a 27% decline in its EPS. Specifically, the home and personal care segment reported a revenue decline of 41% to N5.9bn. stimulated by competition of discounted prices from alternative products to its various products. Following lower material costs and improved cashflow, we expect the company to return to profitability in the near term, however we struggle to see it return to its prior positions. We still expect the recent currency depreciation in March 2020 to put further suppress revenue. We hereby recommend a SELL.