The majority of respondents to a survey have noticed an increase in weather risk prices over the last three years, according to a report published recently by the African Insurance Organisation.

The “Africa Insurance Pulse 2022 – The impact of climate change on the African insurance sector” says that the drivers for higher rates are varied, ranging from restructuring of compulsory insurance, higher reinsurance rates, regulators pushing for rate increases in competitive markets and increasing risks leading to higher demand in risk-exposed regions.

In general, respondents reported increases in the single digit, but Kenya and South Africa saw increases of 20 percent or more. Over a third of respondents indicated that prices for weather protection insurance have remained stable since 2020, as demand is still very low or prices have been indexed.

The findings of the report, prepared by the consulting firm Faber Consulting, are based on both secondary research and in-depth interviews. For the 2022 edition, Faber Consulting interviewed 26 senior executives from 24 insurers, reinsurers and brokers on the African continent. The interviews were conducted from March to April 2022. The aim of the interviews was to assess the impact of climate change on African insurance markets. 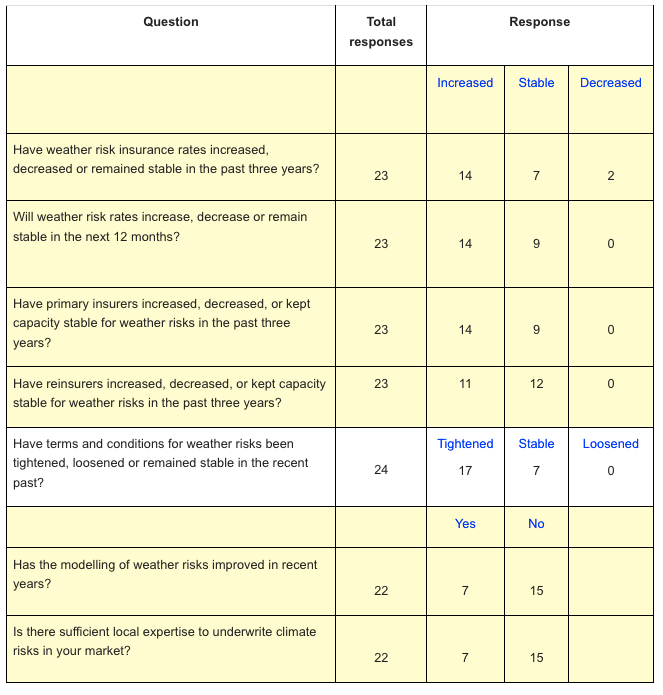 The views of the respondents to various questions on weather risks and modelling are as follows:

More than 60 percent of executives expect climate risk prices to rise. This is especially true for loss-affected natural catastrophe programmes but also for markets where prices have been stagnant for several years. Inflation was cited as another factor behind increases in premiums due to the higher cost of replacement. Some participants also said prices might rise due to more accurate modelling capabilities that better capture risk value.

Some argued that simultaneously rising operating and claims costs will put insurers’ income statements under severe pressure and require higher prices to compensate for these losses. For around 40 percent of respondents, prices are expected to remain stable, as the decisive factors are low risk and product awareness and thus low capacity allocated to weather risks.

The overall insurance penetration remains very low across Africa, excluding South Africa. As a result, insurance capacity for weather risks is not an issue today. Demand is far from exhausting the available capacity. For this main reason, 60 percent of executives agree that insurance capacity for climate risk has remained stable, while 40 percent of interviewees reported an increase mostly due to mandatory coverage.

Global reinsurers would be willing to increase capacity in African markets, which would diversify their main natural catastrophe risks in the Americas, Europe and Asia. However, 52 percent of respondents said that reinsurance capacity for climate risks remained stable over the past three years as primary insurers have increased their retention rates given higher prices and stricter terms and conditions. One participant noted that regional reinsurers play a more important role in weather risks as they replace capacity no longer offered by leading global reinsurers. Some 48 percent of market experts report a slight increase in reinsurance capacity for weather risks due to a rise in demand in selected markets with higher climate risk losses.

The majority of respondents have recently seen a tightening of insurance and reinsurance terms and conditions, primarily to provide greater contractual certainty and exposure transparency regarding the impact of climate risk. The tightening takes many forms: higher deductibles, narrower definitions of events, more loss limits, a shift from proportional to non-proportional coverage, and even exclusions, for example, for drought risks. Some 29 percent of respondents said that climate risk was not yet a determining factor in natural catastrophe cover and that terms and conditions would remain stable. One participant also noted that a better alignment of interests had been achieved on both the insurance and reinsurance sides, thanks to higher deductibles.

Around 70 percent of the insurance market experts surveyed do not believe that climate change risk modelling has improved in recent years. The main reason for this is the lack of reliable historical data on natural disasters in many African markets and the limited economies of scale that make investment in model development less attractive. Without accurate historical data, risks cannot be modelled and, ultimately, insurers cannot price the risk accurately. It is, however, expected that modelling will improve over time as more historical data becomes available. In addition, sophisticated models are not available for most African markets with outdated models of 20 years and more still in use. The remaining 30 percent see some improvements in important markets (e.g. South Africa, Maghreb countries) and for specific risks (e.g. earthquake models for East Africa, flood and earthquake models for Tunisia).

In the past, insurers operating in African markets have often cited the lack of qualified insurance professionals as the main barrier to growth and innovation, leading to insufficient product differentiation and thus increased competition on price.

This continues to be the case for extreme weather risk insurance. The majority of respondents said there is a shortage of qualified professionals. This problem is especially true for insurance companies that rely on a limited talent pool in one or a few markets. For a minority of respondents, mostly global and regional reinsurers and brokers, finding the right experts is not a problem as they have access to a larger pool of experts both regionally and internationally.