In the face of all the gloom and uncertainty beclouding the economy of Nigeria and its financial markets, the Nigerian Stock Exchange All-Share Index is up over 20 per cent year-to-date. This upbeat position may be found around market investors prowling for gains at a time when the country’s fixed income market is offering negative real yields. 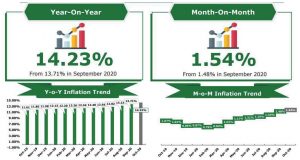 The recent data from the National Bureau of Statistics (NBS) released last Monday revealed that the October 2020 headline inflation rate picked up the pace and maintained its upward trend to 14.23 per cent year-on-year for the 14th straight month to reach its highest since February 2018. The surge is largely attributable to increases across both the food and core components as the food sub-index, in line with analysts’ expectations, rose to 17.38 per cent from 16.66 per cent in the last month, reflecting rises in bread, tubers and fish, among other key items.

Notwithstanding this currently found comfort of inflation on the nation’s economy, a cursory analysis from the data notes that the NBS’s commentary singles out above-average price increases for several items that reflect life under Covid-19 pandemic, which include medical and hospital services, pharmaceuticals, motor cars, vehicle repairs and passenger transport as well as the official removal of fuel subsidies and foreign exchange shortages.

What implication on investors’ wealth?

Further revelation from the inflation data, which have seen a momentous gain for the fourteenth successive month, marked some pointers in the financial and fixed incomes markets, as well as the foreign exchange market.

On the implication of the current inflation rate on investors’ wealth, the rally in the local bourse strengthened in October 2020, pinning the market year to date returns in above-inflation territory of +13.74 per cent at month-end, up from -0.04 per cent at the initial stage of the month. This is against the backdrop of positive corporate scorecards as well as unattractive fixed income space.

Market experts have, however, opined that the equities market is still poised for further gains based on the current average market price-earnings ratio (P/E) and the price/book value ratio (P/BV) around 1.50x and 12.00x vs. 3-year high of 2.00x and 16.00x to 3-year average, and limited investment options for investors.

In the fixed income space, yields continued on a free-fall on thin paper supply compared to the liquidity surfeit encouraged by the expansionary monetary policy stance of the CBN to bolster economic growth. Currently, the divergence between the annual inflation rate and T-bills primary market auction (PMA) stop rate (0.30 per cent for 364-day) has deepened negative returns to -13.93 per cent. Similarly, in the view of several market analysts, this is a situation which would further encourage investors to maintain their risk-on stance.

Moreover, investors may also consider investment in dollar-denominated assets to hedge against inflation due to the feedback effect from imported inflation, while it is also felt that the CBN’s monetary policy committee (MPC) would have to perform some impressive gymnastics, if it is to vote for another rate cut, when it holds its final meeting for the year this November.

Furthermore, on a month-on-month basis, the data revealed that the food inflation rate hit a 40-month high of 1.96 per cent compared to 1.88 per cent month-on-month in September. Notably, imported food pegged at 16.50 per cent year-on-year with the quickening pace rising by +6 basis points compared to +2 basis points in September as the foreign exchange quagmire and capital control measures intensify strain from domestic supply constraints, amid continued border closure.

On the other hand, the core inflation sub-index, which had previously lost speed on a monthly basis, grew to 1.25 per cent month-on-month, stoking annual core inflation to 11.14 per cent. A disaggregation of the core sub-index points to expansion in passenger transport by air, hospital and medical services, and passenger transport by road, especially.

Going into the festive season, there is an anticipation of inflationary pressures that will subsist arising from the usual increase in year-end import bill, which will further stoke the demand for the dollar. Also, the implementation of the new electricity tariff regime is an upside risk, as well as the increase in the price of petrol from N160 per litre to N170 per litre, which feeds directly into transportation cost. In the same vein, the sustained expansionary monetary policy from the MPC, low-base effect and existing structural problems in food production and supply are as well noted as an upside risk.

However, the foregoing, there is now the despondency of seeing the usual seasonal relief from the harvest. Any positives for food prices have been prevailed over by some familiar constraints such as insecurity, herder/farmer clashes, border closures and poor access to markets for these produce and the protests in October.