Tables are probably some of the oldest gadgets around, if you think about it. People have probably been taking things and using them as a high place to put other, smaller things since the existence of people (and things). I’ve certainly been an avid table user all my life, but it never occurred to me that what all those tables have been missing was Bluetooth — until I met Mellow.

Mellow, as the Kickstarter page so aptly describes, is a Bluetooth speaker / power bank / table from Team Creatio, a hardware company with a couple crowdfunding campaigns under its belt. As the company describes it, Mellow is “the only speaker table you (sic) ever want,” and a statement that is certainly hard to argue with.

The design of Mellow is probably the best part of it: it’s a polished wood table, made of either black walnut or ash, with beech legs. The sides are wrapped in a gray fabric that complements the look nicely. 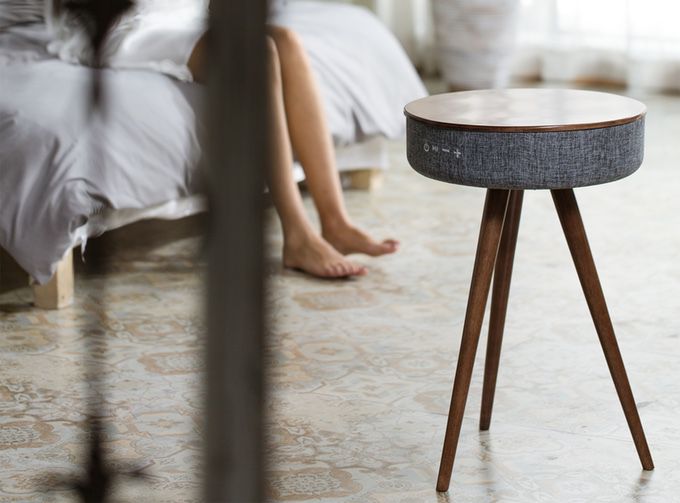 You have to charge the table to use it

But Mellow doesn’t just serve as an end table — it also has a Bluetooth speaker and 3.5mm headphone jack built in for music, along with a pair of hidden USB ports on the back to recharge devices.

Neither of these features are essentially bad on their own, but the problem with Mellow is how it adds the smart feature. Mellow isn’t designed to be plugged in — after all, a cable running out the back would ruin that nice, minimalist design. Instead, it offers an internal battery (either 6,600mAh or 13,000mAh) to power it, which needs to be recharged though an included AC adaptor. Battery life on Mellow isn’t great either, ranging from seven to just three hours depending on how loud you’re playing music.

Again: you have to charge the table to use it. Owning a Mellow could lead to a completely viable scenario where the words “Shoot, the music died — hang on, I need to recharge my end table” could come out of your mouth.

Mellow is available on Kickstarter for $289 for the 6,600mAh model, or $299 for the 13,000mAh version. As mentioned before, Team Creatio has run several previous Kickstarter campaigns successfully, but given that it’s crowdfunding, always use your best judgement.