The warning signs have been there for years. Banco Popular, once regarded as a solid retail bank, had never recovered from its role in the Spanish real estate bubble that preceded the Global Financial Crash ten years ago. The bank barely scraped through the European stress tests last year, and the Spanish government has been anxiously encouraging its big banks to take a punt on Popular and its €37 billion of NPLs. Between June 2016 and June 2017, the bank’s shares tumbled from €1.50 a share to half of that, and then halved again over the last week, finally prompting the European Central Bank to declare “no más” on Tuesday. Yesterday the Single Resolution Board stepped in to end Popular’s misery, imposing losses on shareholders and bondholders, and transferring ownership of Popular to Banco Santander. On its website, the SRB explains: “The mission of the SRB is to ensure an orderly resolution of failing banks with minimum impact on the real economy and the public finances of the participating Member States of the Banking Union.” BBVA, heavily invested in a digital future, was not interested and CaixaBank, which has already absorbed plenty of failing savings banks, also turned down the opportunity. Santander, which is playing catch up on digital banking, perhaps sees a way to boost its strength in retail and SME banking. Still, the depressing reality is that there’s more work to come for the SRB in Italy and Portugal. The fact that a resolution has happened in Spain may now provide cover for the Italians. 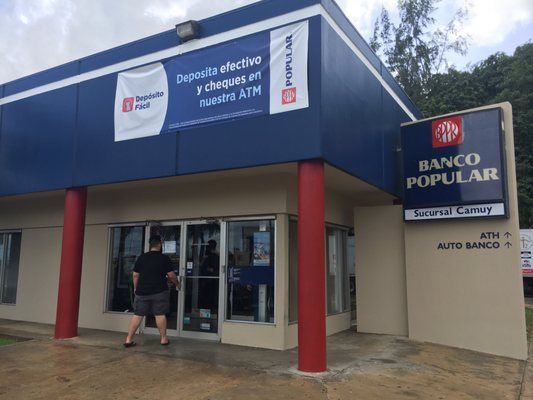 Sclerotic Commerzbank’s Polish subsidiary Bank is known for its nimble and innovative services and products. Does that reflect well on Commerzbank, or on Poland? “Poland’s most popular mobile payments service was not created in a garage or innovation lab,” writes the FT. “It was designed around a conference table by the heads of country’s six biggest banks, who had decided the market needed a new service. BLIK, the application they created, allows users to pay in shops, withdraw money from ATMs and transfer money to friends — all via mobile phones. Introduced in 2015, the service has more than 4m users, representing more than ten percent of Poland’s population.” The piece goes on to list many of Poland’s solutions to banking problems, including the conversion of branches into SME-supporting hubs with wifi and coffee bars, or the mobile ATMs to pick up cash from customers. But, frustrated that they are forced to operate mostly in their home markets, Polish banks are now starting funds to attract global interest in their innovations. “Earlier this year, mBank set up mAccelerator, a fund that will invest $50m in digital start-ups targeting financial services,” writes the FT. “Mr Mastalerz, who is head of the fund, says it is an idea they have borrowed from technology companies such as Google. ‘The best global companies are innovative within but also are able to create an innovation ecosystem around them‘ he says.”

Russian comedian Yakov Smirnoff popularised reversal jokes: “In Russia, radio listens to you!” It’s not so funny anymore, with pervasively attentive technology. Even tech-loving Techcrunch is getting alarmed at Facebook’s dominance of the advertising space and the results of throwing everything from “smart algorithms” to rapidly assembled editorial teams at its news feed to make it more compelling. The most alarming news rises to the top, a problem that Techcruch notes has previously distorted television coverage. “Why have majorities or crazily large minorities of people believed, for many years, that violent crime just keeps getting worse, that their hometown mall might be bombed by terrorists at any moment, that Sharia law will come to their province/state any day now, that the rest of the world is a war-torn shambles only barely propped up by vast quantities of aid we can’t afford — despite the easily available, incredibly copious, clear evidence to the contrary?” Techcruch comes to the conclusion long known to world-weary editors: “If it bleeds, it leads.”

In news that Ireland’s Industrial Development Authority will probably not be posting on its website, Irish entrepreneur Pat Phelan announced the closure of his investment fund for startups with a sideways swipe at the fintech business. Mr Phelan, who sold his security start-up Trustev to TransUnion two years ago, is a big believer in voice recognition. “I am not a betting man but I would stake my house on voice,” he writes on LinkedIn. “I really believe the keyboard hasn’t long left and voice will become ubiquitous… There are of course the big players like Apple, Amazon and Google leading the field with Google in clear first position but keep an eye on Irish company Voysis where Noel Ruane just completed a serious investment.” With a reputation as a fintech booster, Mr Phelan has been evangelical about the need for Irish startups to spread their wings and move to the US to get deep into the fray. However, he’s disappointed with the rate of innovation in Ireland, and recently announced that he would close the fund Nohovation which he launched last year with a pot of $25 million in order to support startups. In a statement that will resonate with ‘heads of innovation’ the world over, Nohovation’s website stated: “That’s all folks. On Friday, 2 June, after a year of reading some of the most awful pitch decks and half-baked business plans in the Western Hemisphere, we wrapped Nohovation & Nohovation Partners due to the lack of investible companies that fit into our remit.”