The newly created Lagos State Parking Authority (LASPA) has rolled out plans on how to tackle indiscriminate parking by vehicle owners on the streets of Lagos, while also listing various parking violations and offences henceforth in the state. 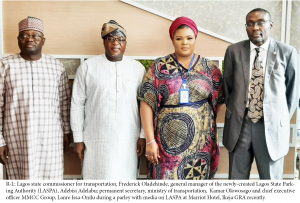 Speaking at a parley with journalists in Lagos recently, the general manager of the agency, Adebisi Adelabu noted that parking problems have been one of the thorniest issues affecting the economy and the environment adding that the state government can no longer fold its hands, hence the need for a holistic approach towards regulating the cause effects.

She said in order to tackle this issue, the Lagos state governor, Babajide Sanwo-Olu, established LASPA in 2021 with the mandate of promoting the Lagos state parking policies in line with national transport policies by advancing knowledge, raising standard and assessment of related fees.

According to her, LASPA will provide an enabling environment for vehicle owners in a secured functional orderly and sustainable parking system management scheme.

She also revealed that while the state government is building and transforming the parking infrastructures within the metropolis, there is a need for the provision of available real-time parking information for city users planning to improve the overall quality of the parking system in the state.

“LASPA will achieve excellence in how Lagos state parking policies are envisioned, developed and in line with best global practices for a modern, efficient and sustainable managed parking system towards reducing congestion, disruption, improved road safety and changing travel behavior.”

She listed various parking offences in the state to include: Parking of commercial vehicles on streets, blocking an entrance or exit and walkway, parking on slots marked for Public transport, fire service, ambulance, taxis and people with special needs.

Adelabu called on all park operators (commercial and non-commercial) to register with the agency for an operating permit from 1st March 2022.

Earlier in his state, the commissioner for transport, Frederic Oladeinde, said the creation of LASPA by the governor of Lagos state, Babajide Sanwo-Olu became necessary to address the indiscriminate acts of motorists who park indiscriminately on the roads and at undesignated bus stops.

The commissioner explained that in line with the first pillar of THEME’S Agenda, traffic management and transportation is key. Therefore, parking space issues needed to be addressed to reduce travel time impeded upon by traffic and make the State a 21st-century running economy for its residents in the short and long term.

Oladehinde maintained that the imbalance between parking demand and parking supply has been the main reason for the metropolis’ unregularised parking problems, hence the need for LASPA.

These, according to him, are contributing to traffic congestion, traffic accidents, and environmental pollution which the agency is fervently poised to address.

According to him, the new Lagos State Parking policy is designed to decongest traffic, address climate change challenges, create job opportunities and also generate revenue for the state through issuance of parking tickets to defaulters.

He urged vehicle owners to shun any act of indiscriminate parking which contributes greatly to traffic congestion, adding that the administration of Babajide Sanwo-Olu is determined to sanitize the transport sector, and make it in tune with global best practices.