The Imo and Abia branch of the Manufacturers Association of Nigeria (MAN) wants the Abia State government to curtail the menace of touts operating under the guise of local government revenue collectors to extort, block, and waylay manufacturers’ vehicles, while in traffic in Aba, the state’s top business destination.

Jude Eluma, chairman, MAN, Imo/Abia branch, in an interview with Business a.m. in Aba, the commercial hub of Abia State, urged Governor Okezie Ikpeazu, to call Abia local government councils to order and have their taxes and levies harmonised.

The Imo State government has harmonised taxes, Eluma said, noting that local governments in the state no longer collect revenue from manufacturers, rather that the state government collects the revenue and gives ten percent of the collection to LGAs. 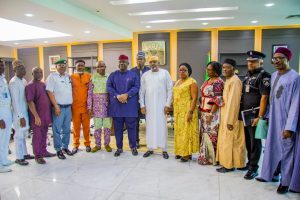 He explained that Imo Revenue Service (IRS) is the only agency mandated to collect revenue for Imo State, while signage and advertisement is under the purview of Imo State Signage and Advertisement Agency (IMSAA).

“Consequently, there is no more touting and use of consultants in revenue collection,” Eluma explained.

He noted that moves, calls and actions were made to replicate the same result in Abia State without positive result, noting that they will not give up until their needs are met, because manufacturing is the hub of the economy of any state.

The MAN chief requested for a bi-annual dialogue with the governments of Imo and Abia, towards feeling the pulse of manufacturing communities, under their  respective domains.

He also requested that the two governments set up a committee on “Ease of Doing Business” in the states with the managing directors and chief executive officers of MAN member companies in the committee, as they wear the shoes and know where it pinches them.

Eluma pledged that MAN would continue to work closely with the government to provide a favourable and conducive manufacturing environment for all genuine manufacturers towards massive industrialization and of the states.