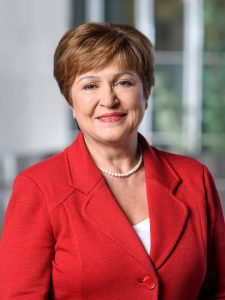 She is the first person from Eastern Europe (Bulgaria) and an emerging economy to be appointed the head of the Fund.

According to her profile, she is also the second woman to become the managing director of the IMF after Kristine Lagarde, who became the first woman to head the IMF when she took the helm in 2011.

Prior to her appointment, Georgieva was on a leave of absence from her post as the chief executive officer at the World Bank and the European Commission.

Her predecessor, Lagarde, 63, guided the IMF through the European sovereign debt crisis, which began about a month after she took office. She departs to head the European Central Bank.

Before her appointment at the World Bank, Georgieva held numerous senior European Commission posts, including budget commissioner, and has deep knowledge of emerging market countries.

Georgieva joined the World Bank as an environmental economist in 1993.

She held various positions in the Bank, including the World Bank Country Director for the Russian Federation (2004-2007); Director for Sustainable Development (2007-2008); Vice President & Corporate Secretary (2008-2010).

The new IMF chief worked with the European Union between February 2010 and December 2018. She was the Vice President for Budget and Human Resources (2014 – 2017)

Kristalina Georgieva has extensive leadership and managerial experience, stemming from an influential array of senior public service posts in the World Bank. At the European Commission, she has been at the forefront of promoting sound economic policies, sustainable development, gender equality and poverty reduction.

From February to April 2019, she served as Interim President of the World Bank Group, following Jim Yong Kim’s resignation announcement.

Between February 2010 and December 2016, Georgieva served in the European Commission and helped shape the agenda of the European Union.

As European Union Commissioner for International Cooperation, Humanitarian Aid and Crisis Response, Ms Georgieva managed one of the world’s largest humanitarian aid budgets and established herself as an advocate for the growing number of crisis-affected people around the world.

She led the creation of the EU’s Civil Protection Mechanism, bringing together the capabilities of the EU member states for effective preparedness, prevention and response to more frequent and devastating disasters.

Prior to joining the European Commission, Georgieva worked for 17 years at the World Bank. Recruited in 1993 as an environmental economist for Europe and Central Asia, in 1998 she was appointed Manager for Environment and later Director for Environment and Social Development in East Asia and the Pacific.

In 2000, she became director for environment for the World Bank and led the application of rigorous economic analysis to pollution control, the advancement of the concept of payment for ecological services, the move of the World Bank Group towards supporting green growth, and the development of carbon markets.

In 2004, she was posted to Moscow as Country Director for the Russian Federation with responsibility for a $2 billion project portfolio and the introduction of new financial instruments such as lending without sovereign guarantees.

In 2007, she was appointed director for sustainable development, overseeing nearly two-thirds of World Bank lending.

From 2008 to 2010, she was World Bank Group vice president and corporate secretary.

She played a key role in the Bank’s governance reforms and the accompanying capital increase in the wake of the 2008 international financial crisis and served as an interlocutor between the World Bank Group’s senior management, its Board of Directors and its shareholder countries.

In 2010, Georgieva was named “European of the Year” and “commissioner of the year” by European Voice for her leadership of EU’s humanitarian response to crises.

DEVEX recognized her as one of the most influential women in global development. She received the Emerging Europe Remarkable Achievement Award and the Foreign Policy Association Medal, in recognition of responsible internationalism and work to expand public knowledge of international affairs. She served as a co-chair of the UN High-Level Panel on Humanitarian Financing and is currently the co-chair of the Global Commission on Adaptation alongside Ban Ki-Moon and Bill Gates.

She is a member of the Global Commission on the Economy and Climate, and the Broadband Commission for Sustainable Development.

She received a master’s degree in Political Economy and Sociology and a PhD in Economic Science from the University of National and World Economy in Sofia.

In 1991 and 1992, she was a Fulbright Fellow at the Massachusetts Institute of Technology, where she co-taught a graduate course on “Economies in Transition”. In 1996, she completed an Executive Development Programme and obtained a certificate in finance from Harvard Business School.

In addition to her native Bulgarian, she is fluent in English and Russian and has a strong working knowledge of French.