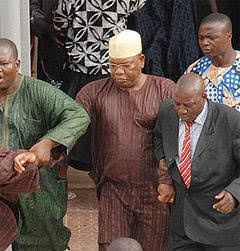 The Federal Capital Territory (FCT) High Court is expected to fix fresh date for the hearing of the criminal trial preferred against Kenny Martins by the Economic and Financial Crimes Commission (EFCC) following the ongoing lockdown by the Federal Government to prevent the spread of deadly COVID-19 in Lagos, Ogun and Abuja.

Justice Modupe Adebiyi had earlier fixed Tuesday, April 28, 2020 for the hearing of the matter but due to pending cases arising from the lockdown, the court is expected to fix new hearing dates and communicate same to the parties accordingly.

It will be recalled that the EFCC had appealed against the judgment of Justice Mohammed Talba of a FCT High Court, Gudu, which discharged him and his co-defendants Ibrahim Dumuje, Joni Icheka and Cosmas Okpara, after he upheld their “no-case submission” on November 24, 2009.

Dissatisfied with the verdict of the lower court, the EFCC approached the Court of Appeal in Abuja, asking it to set aside the judgment on the grounds of perverse verdict and miscarriage of justice.

In its decision over the matter, appellate court had on June 28, 2012, upheld the argument of the EFCC, insisting that its appeal was meritorious.

The Court of Appeal had further in its landmark judgment read by Justice Regina Nwodo, held that Justice Talba erred in his judgement and consequently ordered the Chief Judge of the FCT High Court to reassign the case to another judge for re-trial.

But as the EFCC was getting set to rearraign the defendants, Kenny Martins proceeded to the Supreme Court, asking the apex court to set aside the decision of the Court of Appeal.

The Supreme Court, however, on March 23, 2018, dismissed Kenny Martins appeal, thus finally giving the green light for the commencement of his trial.

Thus, the EFCC amended the charges against Kenny Martins and other defendants and arraigned them before Justice Adebiyi on January 15, 2020 for their various alleged roles in forging Corporate Affairs Commission (CAC) documents to facilitate the PEF fraud among other allegations.