IMPORTATION OF WHEAT AND FISH into Nigeria is on the rise, findings by business a.m. have revealed.
The revelation comes as eight ships laden with both fish and wheat are either berthed or waiting to berth at the Lagos Port Complex, Apapa, weekend. 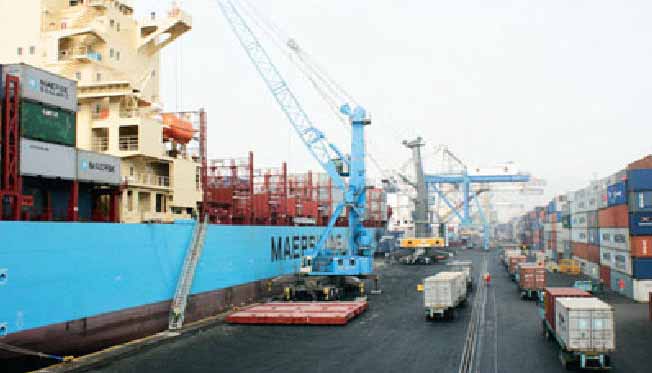 The United States government, one of Nigeria’s major suppliers of wheat said wheat would likely drive its exports into Nigeria by 200,000 tonnes into 2020, representing a four percent rise.
Nigeria’s exploding population growth and industrial demand for wheat, key ingredient for making biscuits, are described to be responsible for the rise in wheat importation.
Seastar Endeavour, a 180-metre ship is currently berthed at the Apapa port laden with 62,000 metric tonnes of wheat, while two other vessels with a total of 106,000mt of wheat are waiting to berth at the same port in Lagos.
Nigeria is Africa’s most populous country with 203.4 million people, according to Central Intelligence Agency’s July 2018 estimates, and its growing population at an annual 2.54 percent (2015-20), is causing big shift to consumption of “greater amounts of wheat-flour based products”, country’s growers and bakers said.
“We are witnessing increased consumption of wheat-based foods such as bread, pasta, semolina and even biscuits,” Ishaq Abdulraheem, chairman of Association of Master Bakers and Caterers of Nigeria, said in Abuja.
The US department of agriculture says the rise in wheat consumption attributable to population growth as well as industrial demand will drive import from Nigeria’s largest suppliers including Russia, the United States, Canada, and Australia to 5.6 million tonnes in the marketing year of 2019/20 from 5.4 million tonnes in the 2018/19 marketing year. Nigeria’s imports of Russian-origin wheat totalled about 1.9 million tonnes last year, compared to imports of U.S.-origin wheat of 1.7 million tonnes.
Nigeria is Africa’s leading manufacturer of biscuits, with annual production estimated at 152,490 tonnes.
Leading biscuit manufacturers in the country include OK Biscuits (OLAM International), Yale Biscuits, Niger Foods, Beloxxi Biscuits, and Energy Foods. Nigerian biscuit segment is valued at $617 million, having grown at a compound annual growth rate of 16 percent in the last five years, according to KPMG.
“Nigeria has the capacity to produce enough wheat for consumption but we haven’t met the consumption targets,” Salim Mohammed said in Kano. Nigerian growers said Nigeria produces nearly one million tonnes a year, although USDA pegged production at 60,000 tonnes, with yields holding steady at one metric tonne per hectare.
Seventy percent of the flour milled from wheat goes into bread, pasta, noodles, biscuits in Nigeria, with bakers favouring flour from imported wheat over locally produced commodity because locally produced wheat tends to have Nigerian Ports Authority’s shipping data shows that of the 19 berthed, three are laden with fish, three with PMS (petrol), while the rest have general cargoes, containers, vehicles, AGO (diesel), bulk wheat, gypsum and LPG.
APM Terminals is handling the most of the 11 vessels awaiting berth, with seven of the vessels waiting to berth at West Africa’s largest container terminal, with containers, while the rest four are laden with general and bulk cargoes and awaiting berth at three other terminals.
Vessels expected in the next few weeks into the month of August at the Lagos Port Complex, Apapa are 29, with APMT expecting 17 container-laden vessels, while ENL is expecting to receive three vessels– two with fish and one with general cargo. DAN REF Terminal is expecting four ships with a total of 13,478 metric tonnes of general cargoes.
GDNL and ABTL terminals will receive two of the vessels with 66,855 metric tonnes of bulk sugar and 53,727 tones of bulk wheat.
There are seven tankers awaiting berth at the various terminals and jetties with a combined load of 255,830 metric tonnes of PMS, according to NPA’s shipping position.