After decades of failing to get its yearly budget passed to begin implementation at the start of a new year, Nigeria’s federal government appears to be steadily getting into the flow as President Muhammadu Buhari on Thursday signed the 2021 Appropriation Bill that will allow government to spend N13.58 trillion in the new year, beginning from Friday, January 1, 2021 for the second time after similarly doing so last year for the 2020 budget. 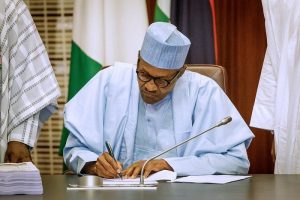 The budget was signed at the Council Chambers of the State House Abuja after the National Assembly passed the Appropriation Bill on Monday, of which it had raised the total estimate by over N500 billion to N13,588,027,886,175 from the initial N13.08 trillion sent to it by the executive branch.

Prior to the signing into law, the President had earlier in October 2020 appeared before the joint session of the National Assembly for the presentation of the proposed 2021 national budget of N13.08 trillion. The proposed budget, according to the presidency, is titled “Economic Recovery and Resilience” and is aimed at promoting economic diversity as well as enhancing social inclusion.

After the presentation, the Committees on Appropriation Bill of both the Senate and House of Representatives submitted a harmonized report to the National Assembly which held special sessions mainly to pass the budget ahead of the Christmas and New Year break.

At the presentation before the lawmakers in October, the president highlighted that the proposed budget consists of N5.65 trillion as the non-debt recurrent expenditure; N3.76 trillion for personnel cost, and N3.124 trillion for debt service. However, with the re-visitation on the budget by the lawmakers, the over N500 billion addition raised the total signed budget estimate.

A breakdown of the signed budget shows that out of the total sum of N13.59 trillion for the 2021 fiscal year, N496.53 billion is allocated to statutory transfers. It was, however, observed that the N125 billion proposed for the National Assembly and its affiliates was increased by N8.99 billion to take it to N133.99 billion.

A further breakdown in the newly signed Bill shows that debt servicing received N3.32 trillion with N5.64 trillion allocated for non-debt recurrent expenditure and capital expenditure got the sum of N4.13 trillion for the 2021 fiscal year.

The budget cycle will begin January and end in December as part of the federal government’s desire to restore the budget cycle to January to December as was achieved with the 2020 budget after the document was being signed into law December 17 2019.

Just In: Oil prices slump by more than 3%

Nigeria alerts airlines to get ready for resumption of international flights