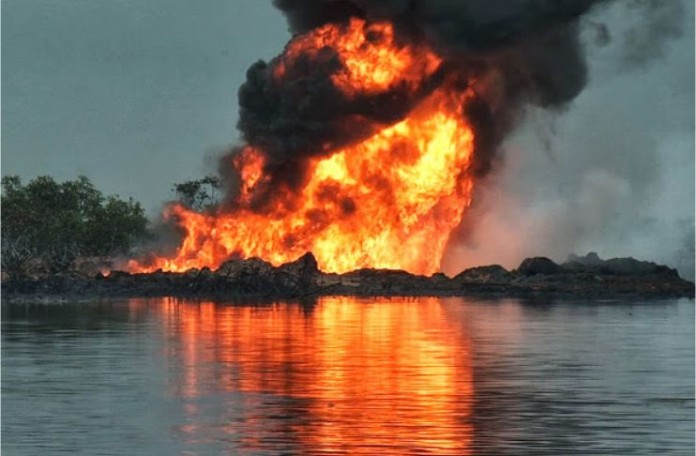 The nation’s oil exports have suffered a setback as an oil pipeline explosion forced the Nigeria Agip Oil Company, a subsidiary of Eni, to close a pipeline feeding the Brass oil export terminal.

It has been reported on Thursday that the explosion on Monday was caused by vandalism, quoting Christina Abiakam-Omanu,.the head of the Nigerian Security and Civil Defence Corps in Bayelsa State.

“The leakage aftermath of the explosion has been contained,” she was quoted as saying, adding that a suspect had been arrested.

An Eni spokeswoman was quoted as saying on Thursday that the pipeline was in a minor field and flow on the line had been halted for repair work.

She, however, said the incident had a “minimal” impact on production, with the Brass export line still running.

The line transports crude to the Brass oil export terminal, which industry analyst, FGE, said was expected to export around 90,000 barrels per day in February.

There are nine flow stations along a 460-km (290-mile) pipeline that feed the Brass terminal, according to information published by Eni.

In a related development, Wood Mackenzie has said the cost increases and uncertainty in Nigeria’s crucial energy sector could lead to a 35 per cent decline in oil output over 10 years as companies delay investments in key oilfields.

The company, in findings shared exclusively with it, warned that three deep offshore fields, which would generate more than $2bn a year for the government at peak production, would likely be delayed as companies put their money in regions with better and clearer terms.

“Nigeria is going to enter quite a steep decline in production. In order to keep its revenue up, it needs to develop additional fields,” said Lennert Koch, principal analyst of sub-Saharan Africa upstream with Wood Mackenzie.

Without the three fields, Koch said Nigerian production would drop by 35 per cent within a decade.