This was disclosed in a statement signed by Garba Deen Muhammad, Chief Corporate Communications Officer of NNPC Ltd.

The statement noted that the signing ceremony was held recently in Rabat, the Moroccan capital, where NNPC Ltd, Morocco’s National Office of Hydrocarbons and Mines (ONHYM) as well as commercial entities of Gambia, Ghana,Guinea, Guinea Bissau and Sierra Leone sealed the agreement.

The statement also described the ceremony as an important step in fulfilling the federal government’s drive towards harnessing Nigeria’s abundant gas resources through the NMGP.

Commenting on the development, Mele Kyari, Group CEO of NNPC Ltd, stated that Africa stands to benefit from the execution of the project, which goes beyond the provision of gas to energise the countries along the route.

“Other benefits include the creation of wealth and improvement in the standard of living of our citizenry, increased cooperation between our countries while mitigating against desertification and other benefits to be driven from reduction in carbon emission,” he added. 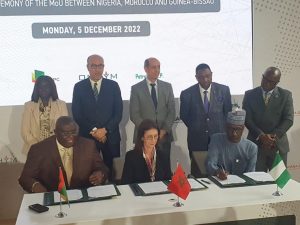 Kyari, who defined natural gas as a critical fuel in the move towards net-zero, emphasized that NNPC Ltd. is in a good position to advance the NMGP by utilizing its experience and technical capabilities, which include gas production, processing, transmission, and marketing, as well as its extensive experience in carrying out significant gas infrastructure projects in Nigeria.

The NNPC CEO also assured that the company will facilitate the continuous supply of gas and provide other enablers such as the required land for the first compressor station to be deployed in Nigeria, which is among the thirteen stations earmarked along the pipeline route.

In their speeches, the delegates of the West African countries reaffirmed their countries’ commitment to making the NMGP Project a reality.

Sylvia Assimeng Archer, the general manager, commercial/legal advisor of Ghana Gas, said the event was of monumental significance to her organisation in its efforts to unite people from different countries and communities through its operations.

Baboucarr Njie, the managing director of the Gambia National Petroleum Company (GNPC), said the recent discoveries in the neighboring countries of Senegal and Mauritania have encouraged the country’s search for hydrocarbons. He noted that the opportunity provided by the NMGP project will significantly increase their chances of finding natural gas in Gambia.

Foday B.L. Mansaray, the general director of  the Petroleum Directorate of Sierra Leone (PDSL), said that  his country was enthusiastic about the NMGP partnership’s potential. He also emphasised the benefits of increased cooperation for the advancement of the African continent.

Celedonio Placido Viera, the general director of PETROGUIN of Guinea-Bissau,  stated in his remarks that his country was pleased to be a part of the NMGP Project, noting that it will improve the lives and economy of the countries on the continent.

When the project is completed, it will provide approximately three billion standard cubic feet of gas per day (3bscf/d) along the coast of West Africa, from Nigeria to the West African countries to the kingdom of Morocco, and then to Europe.