Norway, the world’s largest stockfish exporting country, has appealed to the Nigerian government to remove stockfish from the list of the 43 items restricted from accessing foreign exchange for importation. 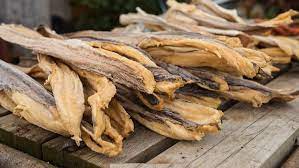 Bojmar Skjaran, the Norwegian minister of fisheries and ocean policy,who made the plea during a recent  sensitisation and awareness seminar on food safety organised by the Norwegian Seafood Council in Lagos, said that the inclusion of stock fish on the list has made it more difficult for both Nigerian importers and Norwegian exporters to trade in the commodity.

Emphasising the need to make forex accessible for the importation of stockfish, the minister noted that there is a growing demand in Nigeria  and the forex restriction has made it more expensive for both importers and consumers of stock fish.
Skjaran further lamented that the poor logistics in the ports of Nigeria and high  import taxes has worsened the situation in recent months, noting that the fish industry has reconfirmed the fact that stock fish prices may increase well beyond its current state if the issues are not properly addressed.

Making a case for Nigeria’s stockfish importation from the European country, the minister said the Norwegian government is not in competition with locally produced fish in Nigeria. He explained that stockfish is a unique product that can only be produced in a special climate that is only present in Northern Norway, adding that it is low in fat and a good source of protein as it contains 80 percent of protein requirement for consumers.
Skjaran further noted that besides being the world’s largest stock fish exporting country, the commodity plays an important part of the businesses and culture of Norwegians, adding that the trade in the commodity dates back more than a 100 years.
“The Norwegian government will continue to work with the Nigerian government with a view to removing it from the list of items restricted from accessing foreign exchange,” he assured.
Businessamlive Website Stats