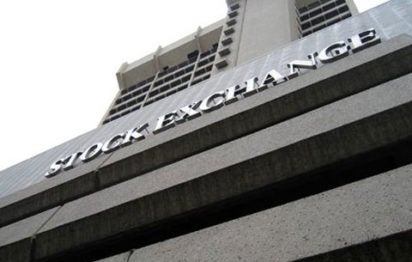 The Nigerian Stock Exchange (NSE) is growing stronger in the green territory following another session that closed positive on Wednesday, as the stock index firmed up by 0.62 per cent.

Since the market opened on Monday, investor confidence has remain positive, propelling the market to rally N9 billion, N58 billion and N73 billion profits on Monday, Tuesday and Wednesday respectively.

During the three sessions, a cumulative N140 billion gain has propelled spurred the NSE All-Share Index (ASI) to add 269.02 points, equivalent to 1.19 per cent appreciation, and close higher at 22,868.40 basis points at the end of midweek trading on Wednesday.

Similarly, the valuation of listed stocks at the domestic bourse grew with the same percentage points  to close Wednesday at N11.918 trillion from N11.778 trillion is commenced the week.

Statistics obtained from the NSE and analysed by business A.M revealed that sustained rally at the last trading session was triggered mostly by 2.4 per cent growth in the stocks of MTN Nigeria and 3.4 per cent rise in the share prices of First Bank of Nigeria Holdings (FBNH).

Pointedly, the All-Share Index increased by 0.6 per cent and consequently, the Month-to-date (MtD) gain increased to 7.4 per cent, as Year-to-Date (YtD) losses moderated to -14.8 per cent.

Analysing by sectors, performance was positive as all sectors gained, save for the Insurance index which dipped by -0.2 per cent.

Specifically, the Oil and Gas index gained by 0.4 per cent to lead other gained sectors, followed by the Consumer Goods with 0.4 per cent rise; Industrial Goods index with  0.2 per cent appreciation while and Banking soared by 2.8 per cent.

Market sentiment, as measured by market breadth, was positive with the emergence of as 14 gaining stocks relative to 12 decliners.

Courtville and Vitafoam both appreciated by 10 per cent to top gainers’ chat while on the flip side, ETERNA shed -9.6 per cent, followed by UPL which lost -7.6 per cent in price value to top losers of the day.