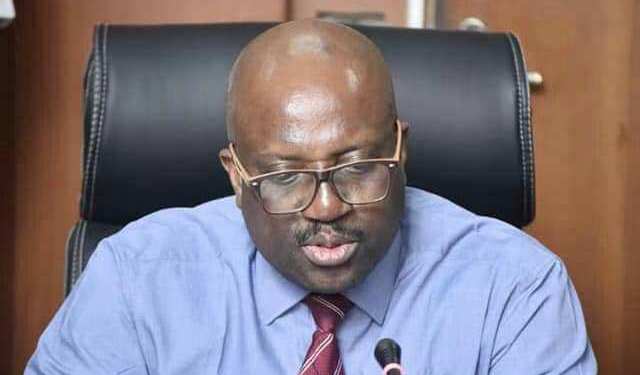 Kemebradikumo Daniel Pondei, a professor of medical microbiology and the new acting managing director of the Niger Delta Development Commission (NDDC), has promised to steer a radical direction in his headship of the Federal Government quango that has been at the centre of financial infractions since its establishment some 20 years ago.

Like past chief executives of the commission, who promised to make changes, Pondei says his management style would “enhance service delivery.”

He made the promise during a meeting with management and staff of the NDDC, shortly after assuming office at the commission’s headquarters in Port Harcourt, Rivers State.

A day earlier, Godswill Akpabio, the minister of Niger Delta Affairs, had inaugurated the enlarged interim management committee (IMC) of the NDDC, as approved by President Muhammadu Buhari.

Since President Buhari’s dissolution of its governing board and management team, and calling for a forensic audit of the commission, about three months ago, the NDDC, with a notorious record of graft, has had three or more interim management committees; with virtually none of the IMCs able to conclude a full audit.

The new NDDC chief executive officer harped on the need to change a number of things at the commission, noting: “We need to have quality assurance because we must have measurable performance indicators in every unit and department.”

He said: “By my training, I am a problem solver, and I pray that members of the IMC will work together to solve problems. The NDDC has existed for about 20 years, rising from the ashes of the Oil Mineral Producing Areas Development Commission, OMPADEC.

“A 20-year-old child that still needs to take breast milk is in trouble. By extension, the NDDC is in trouble. Luckily, President Buhari feels for the Niger Delta. This feeling is also shared by the Minister of Niger Delta Affairs. Their concerns led to the decision to try to adopt new methods in tackling the problems of the Niger Delta. They decided that since we have done the same thing, using the same method over and over again and getting the same result, it was time to try something different,” he further said.

Pondei said that members of the new NDDC committee had resolved to work together as an indivisible team.

He, however, remarked that the IMC needed to also work in harmony with the NDDC management and staff.

The acting managing director said that feelers from members of the public show that NDDC staff were seen as contributing to the problems of the region.

“I am not here for a blame game. I would rather that we do a soul-search. Majority of us are from the Niger Delta, and I am sure they are not happy with the poor state of affairs in the region,” he said.

According to him, the Niger Delta was not supposed to be the way it is, adding that the region should not be at the same level with other parts of the country. “We are supposed to be different, considering what we contribute to the economy of this country,” he stressed.

Pondei charged that the commission’s management “must come up with ways of improving on our service delivery. We need to drive this seriously. We must pay serious attention to efficiency and quality. Every department will need to come up with new work plans and we need to have measurable indices in those work plans.

“There must be a way of showing what the NDDC has been able to achieve over time. We need to do things that are totally different from what obtains now.”

The acting executive director, Finance and Administration, Bassey Etang, thanked the directors and staff of the NDDC for cooperating with members of the IMC.

He noted that the staff did not disappoint the executive directors, and would most likely extend the same cooperation to the enlarged IMC. He assured the new NDDC boss of maximum cooperation, stating that it was important to ensure that the IMC succeeded because “when we succeed, Niger Delta will be the better for it.”

The new NDDC helmsan, with specialty in virology, was the provost of the College of Health Sciences, Niger Delta University, until his new appointment.

NSE waives number of shareholders requirement for Airtel to list