The all-enforcement leader of the presidential task team on Apapa gridlock, Kayode Opeifa has described the Apapa and Tin Can Island ports as corruption zones, saying that the ports suffer from all-round inefficiency. 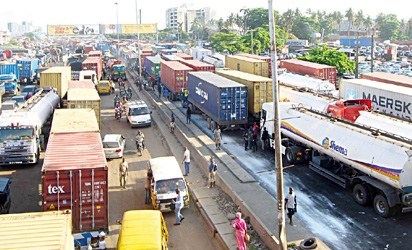 Opeifa, a former commissioner of transportation, Lagos State was reacting to a recent report of alleged corruption by men of his team, which he debunked, claiming otherwise that some corruptible elements in the port system who felt threatened by the good work of his team were fighting back and feeding the media with wrong information.

According to him, his team has delivered 100 percent on their mandate.

“We’ve cleared the road and everyone, including the truckers and the residents can get to the port now. The trucks you saw on May 22 have made nothing less than 20 trips since that day,” he said.

Opeifa also took a swipe at the Nigerian Ports Authority (NPA) for failing to assist his team with publication of traffic advisories, the routes and movement of trucks in and out of the ports.

“We need to publish it that trucks going to Tin Can Island Port do not come through Funso Williams, while trucks coming to Apapa Port should stop coming through Tin Can Port. We have asked NPA to publish this information on our procedures and ways we work but for two months now, they have not published,” he said.

He said trucks were paying N65,000 unreceipted charges to some corruptible security agents to access the port, which was what the presidency wanted to stop with his task team, anchored at the office of the vice president, Yemi Osinbajo.

He maintained that the traffic gridlock in Apapa was man-made.

He said, “The issue in the port is not about congestion. It is about efficiency. We need to make the port more efficient and on this, one thing we need to do is to have effective call up system. There should be no preferential treatment. Terminal operators should work as they should work. Prospects for extortion should be removed and people working in the port should work with standard operating procedure.

He also berated the shipping lines and the terminal operators for not providing holding bays.

“What the port needs is efficiency with the terminal operators. APMT can take 600 trucks but it is handling 1,000 trucks. Can they handle them? No, the remaining 400 have no business in the port, you cannot go beyond your capacity. Trucks are coming to the port because there is no transit parks, empty containers are supposed to go to the holding bays, but the holding bays are not working, they exist but it has all been loaded with empty containers,” he said.