The South Koreanphone maker Samsung is set to announce the launch of the much awaited SamsungGalaxy Note 10+ into the market, tomorrow, August 7, 2019 in New York. 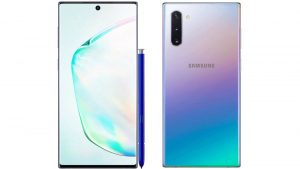 The company also planned to release two other devices such as the controversial Samsung GalaxyFold smart phone into the market which suffered setbacks last year. Samsung wouldbe the first successful company to come up with a fold-able smart phone device into the mobile phone market globally as otherphone makers follows suit.

The Samsung Galaxy Note 10+ comes with a 5Genabled connectivity which means that for prospective users of the phone they willexperience seamless speed in data connectivity as well as app functionalitywill be at top speed with the 5G technology.

Samsung phoneusers and enthusiasts will be guaranteed of state of the art camera features asthe new Galaxy Note 10+ comes with three cameras at the back, one will includea 13 megapixel lossless zoom telephoto lens. The Note 10+ will be accompaniedwith the stylus known as S-Pen which will allow users to take photographs.

Tech experts andenthusiasts are still guessing how much the Galaxy Note 10+ would cost as the it willbe announced tomorrow.