U.S. stocks plunged on Wednesday, with the Dow Jones Industrial Average falling more than 450 points, as investors were spooked by the latest signals from the bond market that pointed to heightened risk of a recession.

U.S. Treasury yields took another dramatic drop and the premium on three-month bill rates above 10-year note yields was at its most elevated levels since March 2007. This so-called inversion between the two maturities has preceded every U.S. recession in the past 50 years. [US/]

This comes on the heels of monetary easing from central banks in New Zealand, India and Thailand on Wednesday, and as fears of the trade war hurting global growth remerged after President Donald Trump last week threatened to slap 10% levies on the rest of $300 billion of Chinese imports. 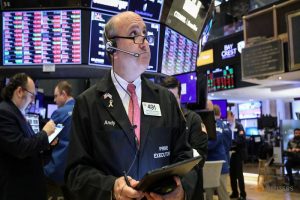 “(Markets) are moving lower on global growth concerns. And coming into question is the broader fundamental strength of economies around the world, “ said Mike Loewengart, vice president, investment strategy, at E*TRADE Financial Corp.

The interest-rate sensitive S&P 500 banks sub-sector slipped 3.41%. The broader financial index dropped 2.60%, the most among the 11 major S&P sectors which were all lower.

China’s offshore yuan fell through the key level of 7-per-dollar mark after recovering partly on Tuesday that had sparked a 1% gain in the three main Wall Street indexes. [CNY/]

With the second-quarter earnings season winding down, about 73% of the 426 S&P 500 companies that have reported results so far have topped earnings estimates.

Walt Disney Co dropped 5.7% after its quarterly earnings missed analysts’ forecast as the company invested heavily in its streaming platform and began folding in assets purchased from Twenty-First Century Fox.