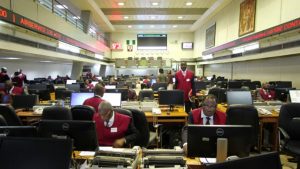 Also, the performance across sectors was mixed as three indices lost, two gained and one closed flat. The insurance index sustained gains, advancing 6.3 per cent due to buying interest in Aiico Insurance (+9.9%), NEM Insurance (+10.0%) and Wapic Plc (+10.0%).

The NSE 30 Index marginally increased by 0.01 per cent to close at 1,684.99 points as against 1,684.82 points on the previous day. Market turnover closed with a traded volume of 172.68 million units. Flour Mills and Lafarge Africa were the key gainers, while Access and Sterling were the key losers.

In the foreign exchange market, the naira traded flat from the previous day’s close at N475 per dollar in the street market. Also, at the I&E FX market, the naira appreciated further by 0.12 per cent as the dollar was quoted at N393.35 as against the last close of at N393.83. Most participants maintained bids of between N388 and N415.76 per dollar.

In the Nigerian treasury bills market, it was a positive trading day with average yield across the curve decreasing by 8 basis points to close at 0.39 per cent from 0.48 per cent on the previous day. Average yields across short-term and long-term maturities fell by 13 basis points and 10 basis points, respectively, while the average yields across medium-term maturities remained unchanged at 0.41 per cent. However, maximum buying interest was seen in the NTB 13-Jan-22 (-102 bps) and NTB 15-Apr-21 (-76 bps) maturity bills.

Ahead of Wednesday’s N150 billion FGN bond auction by the DMO through the re-opening of 10-year, 15-year and 25-year tenors at N50 billion each with the settlement expected to be two days later (January 22), oversubscription is expected by investors who are likely to take advantage of the higher returns on the FGN bonds compared to the treasury bills.