What would tantamount to a desecration of the memory of Madiba (the late President Nelson Mandela of South Africa)? Intolerance would perhaps rank very highly on such a list. Tolerance by which the late sage ensured that South Africa did not break into a civil war post independence now seems to be under threat from within.

It is rather weird that the openly expressed hostility by South Africans to Nigerians, Zimbabweans and other Africans does not extend to non-Africans. The Africa Centre for Migration & Society (ACMS) is doing a lot to generate empirical data that could be useful in the analyses and reaching lasting conclusions on different sides of the xenophobia conversation.

Going through history, one may be correct to say that tensions between South Africa and Nigeria began to deteriorate significantly, probably around 2017 leading up to 2019 when some Nigerians were forced to leave South Africa amidst another wave of xenophobic attacks. A lot has been documented on the state and perceived causes of xenophobia. 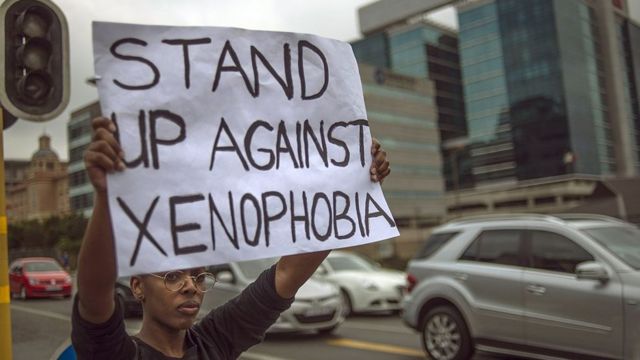 You may be forgiven to think that the state visits of President Mohammadu Buhari and that of President Cyril Ramaphosa in 2019 and 2021, respectively, would have somewhat healed the budding tensions.

At the moment it is clear that the lockdown and COVID-19 related agitations that began in 2020 have added salt to the proverbial injury of diplomatic relations between South Africa and Nigeria. A cold war is perhaps the only way to describe the socio political stance that South Africa has suddenly turned on Nigeria and its citizens. It would appear that the several years of bilateral relations and African partnership mean little or nothing to the South African diplomatic corps.

Whilst the Nigerian government is largely ignorant or pretending to be unaware of the terrible treatment meted out to her citizens intending to travel to the Rainbow nation, the South African High Commission keeps growing in boldness even within the Nigerian borders. The South African wing of VFS Global has closed down two of its offices in Lagos and Port Harcourt, forcing thousands of applicants to go to the Abuja office since February 1, 2022.

The Commission was initially evasive about the reason for the closure which they explained would be temporary. The information was uploaded to their official website but later removed. Now only the Abuja office collects visa applications from all over Nigeria with complaints of oversubscription as though oblivious that applicants from the other parts of the country were being forced to come to Abuja.

When put into proper perspective, it is interesting that the United States, United Kingdom, Canada, France and other European Union countries, amongst other countries, process applications from Lagos and Abuja. It then makes you realise this was a deliberate act by the South African authorities to shut out Nigerians. It is, without doubt, a deliberate state objection to exclude Nigerians from their territory.

Some inquiries from the South Africa Tourism team (especially during the recently concluded Tourism Indaba at Durban) revealed that there was supposed to be an e-visa system in place in Nigeria; but this has now turned out to be a ruse.

More frustrating from the Nigerian perspective, is that the High Commission has resorted to simply collecting application fees and refusing to process the same till the visa requested date has passed. Close watchers will see that over the last five months, the success rate in the issuance of visas to Nigerians has dwindled significantly.

Investigations also revealed that while applicants for South African visas in Nigeria are being unfairly treated, applicants from other African countries, including Ghana, a neighbouring West African country, receive South African visas within one to three working days. Deliberate delay in the approval and issuance of visas is the new tactic the South African High Commission employs to frustrate Nigerians. The reality is that these issues are not new and the inactivity of the Nigerian government has allowed Nigerians to receive unacceptable insults even in our own country. In November 2018, International Centre for Investigative Reporting (ICIR) published a piece titled, “How South Africa denies Nigerians entry through late issuance of visa”, and almost four years after, the situation has gone from bad to worse (https://www.icirnigeria.org/how-south-africa-denies-nigerians-entry-through-late-issuance-of-visa/).

Arguably, South Africa has become the xenophobia capital of the world.

This generalisation of Nigerians of all classes and background as enemies of the republic appears to be the latest South African antic in their arsenal of xenophobia. This is not just unfair in the spirit of Ubuntu but largely unclear in the historical dealings of both countries. For whatever reason, the South African diplomatic team has taken a position that is inimical to the cooperation between both countries. Could this be seen as an aftermath of the COVID-19 pandemic as alluded to in a recent article (https://mg.co.za/news/2022-05-18-covid-19-escalates-xenophobia-in-south-africa-report/)? In my opinion, no excuse is good enough for such antagonism without provocation. There is a Yoruba adage that simply translates thus: it is what a person wants to do that his drunken state brings to the fore. If some Nigerians have misbehaved or acted wrongly in South Africa, is there anything stopping the full application of the law against them? The attempt to label all Nigerians enemies of South Africa is not just beneath any honest human society, it is a declaration of war.

It is quite shameful that this treatment is metted out to the nationals of a country whose support always tilted world position in favour of the majority black South Africans during the period of minority apartheid rule; and in recent times, during the outbreak of the Covid-19-Omicron variant.

Conclusively, until the South African High Commission starts acting like a responsible diplomatic mission and in alignment with other forward thinking nations, an urgent intervention by the Nigerian government should be done in the short term. An enquiry needs to be launched into the dealings of the South African High Commission in Nigeria over this period. Further to this, all fees paid in all cases of deliberate visa delays should be refunded by the Commission.

Temitope Olomola, PhD, is a Senior Lecturer in the department of chemistry at Obafemi Awolowo University, Ile-Ife, Osun State, Nigeria