The United States hopes to re-launch trade talks with China after President Donald Trump and President Xi Jinping meet in Japan on Saturday, but Washington will not accept any conditions around the U.S. use of tariffs in the dispute, a senior administration official said on Tuesday. 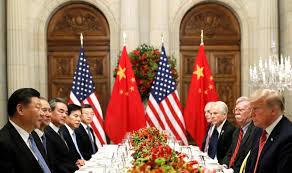 Trump has threatened to impose tariffs on another $325 billion of goods, covering nearly all the remaining Chinese imports into the United States – including consumer products such as cellphones, computers and clothing – if the meeting with Xi produces no progress in resolving a host of U.S. complaints around the way China does business.
The two sides could agree not to impose new tariffs as a goodwill gesture to get negotiations going, the official said, but he said it was unclear if that would happen.
The United States was not willing to come to the Xi meeting with concessions, said the official, who spoke on the condition of anonymity. Washington wants Beijing to come back the table with the promises it withdrew before talks broke down, he said.
China has shown no softening in its position and said on Monday that both sides should make compromises in the trade talks and that a trade deal has to be beneficial for both countries.
The back-and-forth set up what could prove to be a tricky meeting between Trump and Xi at the Group of 20 summit meeting in Osaka. The session will be the first time they have met since trade talks between the world’s two largest economies broke down in May, when the United States accused China of reneging on reform pledges it made.
Chinese Vice Premier Liu He, who has led trade talks for Beijing, held a phone conversation with his counterparts, U.S. Trade Representative Robert Lighthizer and U.S. Treasury Secretary Steven Mnuchin, on Monday, according to China’s Ministry of Commerce. The three men are helping to pave the way for talks between the leaders later this week.
Expectations for that meeting so far appear to be low. The best-case scenario would be a resumption of official talks, which could ease fears in financial markets that the already long trade dispute might continue indefinitely. The fears have pummeled global markets and hurt the world economy.