The turmoil engulfing President Donald Trump’s administration spilled into financial markets as U.S. stocks fell the most since March, measures of volatility spiked higher and Treasuries rallied with gold.

The Dow Jones Industrial Average lost 250 points, shattering the calm that gripped markets in the past month as the crisis threatened to derail the policy agenda that helped push equities to records as recently as Monday. The dollar dropped a sixth day, while Treasury 10-year yields tumbled to 2.25 percent. The spread between 10-year and two-year yields narrowed to below 1 percentage point, the flattest since before the U.S. Election. Emerging-market equities halted a seven-day rally. Crude rose after U.S. inventory data.

“If he’s preoccupied defending himself and if it goes a lot further, then any hope of his legislative agenda coming to the fore is going to be reduced,” John Stopford, the London-based head of fixed-income at Investec Asset Management Ltd., said in an interview with Bloomberg TV. “Clearly at the margin it’s a negative. At the moment there’s a classic environment for yields to rally a bit further and for the dollar to sell off.”

Stopford discusses the impact of the Trump news on markets. 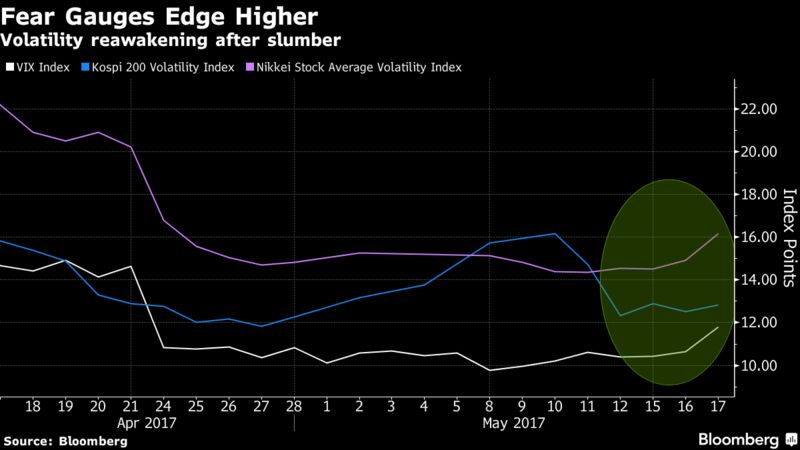 After a protracted period of dormancy, financial markets are beginning to react to developments in Washington in a more unified manner. With stock and bond volatility muted, investors have looked for a clearer reaction to the political din in currency markets. The U.S. currency now sits at its lowest level since the day of Trump’s shock win, a retracement some blame on perceptions his legislative agenda faces deeper challenges.

Even here, though, traders have been divided on what is moving the U.S. currency, with some seeing catalysts beyond politics. One explanation for the retreat might be weaker-than-expected readings on U.S. inflation and economic growth in the past month, data that have coincided with easing perceptions of political and economic risks in Europe. While traders continue to price in two interest rate increases by the Federal Reserve this year, speculation is rising that European counterparts are preparing to withdraw their own stimulus measures.

“The only political calibration the Fed has is how much Trumponomics we were going to get that they can’t see yet,” Neil Dwane, global strategist at Allianz Global Investors, said in an interview with Bloomberg TV. Even so, U.S. policymakers “are in the mindset to raise as long as the markets are prepared for it,” he said.

Here are some key events coming up:

OPEC’s internal Economic Commission Board meets in Vienna to discuss the market in preparation for the group’s formal meeting on May 25. The U.S. Energy Information Administration is projected to report that crude stockpiles declined by 2.67 million barrels in the week ended May 12, according to a Bloomberg survey of analysts.

Data from Japan on Thursday will likely show the economy accelerated in the first three months of the year, posting a fifth straight quarter of expansion. That would be the longest consecutive period of growth since 2005-2006.

Here are the main moves in markets:
Stocks