Global: Sentiment across the global space was mixed this week, with markets across Asia closing lower, while markets in Europe traded higher and the U.S. markets were in the red. Starting in Asia, the Shanghai Composite fell sharply this week, down 4.00%, while the Japanese Nikkei-225 and Hong Kong Hang Seng eased 3.17% and 6.17% respectively; Asian stocks dipped amid growing concerns that soaring oil prices and its impact on producer prices will lead to short-lived inflation, weighing on gradual and sustained economic growth in the region. Moving to Europe, the German DAX was the best performer rising 6.31% w/w, as investors reacted to the latest economic data out of the region. In the U.K, the country’s statistical office showed that the British economy grew 0.8% in January. Additionally, in a message to a Russian nation, President Putin hinted that there are “certain positive shifts” in the negotiations between Moscow and Kiev, and this boosted market sentiment in Friday’s session.

Finally, sentiment in the U.S. was still sell-side driven as major markets in the region traded in the red w/w. U.S. markets were weighed down by the highest inflation figures since 1982; the annual inflation printed at 7.9% in February, according to a report published by the Bureau of Labor Statistics. For the week, the NASDAQ, S&P 500, and Dow Jones, were down 1.78%, 0.36%, and 0.17% respectively, at time of writing.

Domestic Economy: On account of the ongoing tensions between Ukraine and Russia, oil prices have skyrocketed to record-highs. As a result, the prices of its constituents, including petrol, diesel, and aviation fuel, have risen in tandem. These complicate things for Nigeria which was struggling with off-spec PMS imports and the absence of a deregulated downstream sector. While air ticket fares have been adjusted, these adjustments may be insufficient considering the rapid surge in oil prices and weakness in the Naira. As a result, fuel scarcity erupts no thanks to the economic sanctions on the third-largest exporter of crude oil. Thus, Nigerian consumers are faced with the twin challenges of jet fuel and petrol scarcity. Historical evidence shows that fuel scarcity has a negligible impact on headline inflation in Nigeria. In the current scenario, however, both fuel scarcity and food export bans (from Ukraine and Russia) could team up in aggravating food prices not only in Nigeria but across Sub-Saharan Africa.

Equities: Local equities posted marginal gains this week, rising 0.36% w/w fueled by gains in the banking space. The banking sector rose 1.29% w/w, driven by gains in ZENITHBANK (+2.08% w/w), and UBA (+3.64% w/w) amongst others. Meanwhile, it was a red close for other major sectors across the index. Starting in the Oil and Gas space, profit-taking action in SEPLAT saw the stock fall 4.26% w/w, to trade at ₦990/share. Moving to the Consumer Goods space, sell-side action in brewer NB (-4.17%) w/w weighed on the sector’s performance, as the space lost 0.52% w/w. Finally, sell-side action in cement maker Lafarage (NGX: WAPCO) saw the stock fall 2.08% to trade at ₦23.5/share.

Fixed Income: The secondary market was largely positive this week, as yields trended downwards in the bonds space, while remaining flat w/w across the NTB and OMO segments. In the bonds market, as demand remained robust at the short and long ends of the benchmark curve, average yield declined 16bps w/w. Meanwhile, trading in the OMO and NTB segments remained muted during the week consequently, yields remained unchanged w/w.

Currency: The Naira remained unchanged at the I&E FX Window at ₦416.00

Fixed Income: Next week, we anticipate bullish trading in the bonds space, as coupon inflows of about ₦185 billion hit the market, while the T-bills segment is expected to trade on a muted note in anticipation of the PMA slated for Wednesday. 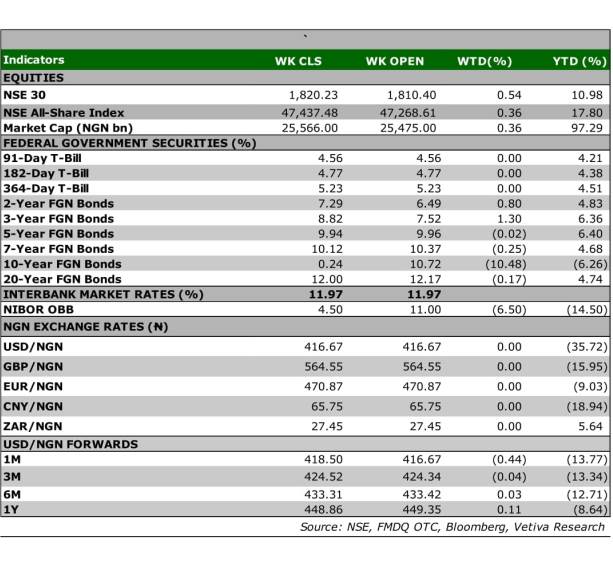 In its FY’21 results, UBA reported a 7% y/y growth in Gross Earnings to ₦658 billion (Vetiva: ₦646 billion), thanks to an 11% y/y growth Interest Income. The bank’s impressive Interest Income growth was spurred by higher income from loans and advances, a result of the bank repricing a significant portion (over 70%) of its loan book during the year. Furthermore, the bank bucked the trend of lower income from investment securities, reporting a 4% growth in the line item during the year as the bank reported a 32% rise in investment securities during the period.

On the other hand, the bank reported a 12% y/y decline in Non-Interest Revenue (NIR) to ₦126 billion, on the back of a 70% y/y decline in trading and FX related income, which management attributed to weaker trading volumes during the year. This countered the 25% y/y improvement seen in commissions and fees income, the strongest yearly growth since 2012, as transaction turnover across the bank’s digital and mobile platforms (e-banking) grew by over 40%.

Despite only contributing 42% of Gross Earnings, UBA’s Subsidiaries in Africa accounted for 63% of the banks pre-tax profits, up from 55% in 2020, while growing 37% y/y to ₦97 billion. The segment reported a lower cost-to-income ratio for its Rest of Africa segment (38%) than the Nigeria business (44%) and saw lower impairments (₦2.5 billion vs ₦3 billion). Furthermore, the Rest of Africa business reported a 14% y/y growth in loans and advances, outpacing Nigeria (+3%), driving the 5% y/y growth in loans and advances for the group. Looking forward, we expect the contribution of the Rest of Africa business to continue to increase, as the bank’s operations across the continent continues to expand in the coming years, and we expect a 70% contribution to pre-tax profits in FY’22.

Despite the impressive FY performance, UBA’s Q4 earnings fell 3% q/q, as interest income declined 8% and NIR fell 37% q/q. Meanwhile, impairments jumped to ₦9 billion from a net positive position in the previous quarter. This means that PBT for Q4 was 37% lower than Q3, while PAT came in 68% lower q/q, the largest drop in profits seen in the final quarter since Q4 of 2019, which was also spurred by a rise in provisions. Therefore, we conservatively place our provisions expectation for2022 at ₦12 billion, a cost of risk estimate of 0.5%, slightly above 2021 figure of 0.4%.