Global: It was another week of mixed trading as pandemic risks, the ongoing Russian-Ukraine conflict and rising energy prices drove trading activity. Markets in the Asian-Pacific region, had another strong week, propped up by a stronger dollar; the USD gained against the Yen and Yuan in trading this week. Of note, the Japan benchmark Nikkei-225 was the best performer w/w, rising 3.66% in the period; Sony Corporation saw its share price surge 8.3%, following its State of Play event at the E3 conference, as investors expressed optimism over their slate of upcoming products. Additonally, the Shanghai Composite rose 2.08% w/w; as interest in heavy weights Contemporary Amperex Technology (+10.8% w/w) and China Yangtze Power (+20.4% w/w) propelled the market higher. Moving to Europe, the ongoing conflict in Ukraine, coupled with higher energy prices continue to weigh on buy-side interest from investors, despite the attractive valuations across the space. Concerns about the impact of higher energy costs on consumers and businesses have only been heightened this week, following the release of May inflation figures for the Euro zone. Inflation came in at 8.1% m/m, above expectations of 7.8%. For the week, the German Dax rose 0.20% w/w, whereas the London FTSE 100 and the French CAC sank 0.30% and 0.15% respectively. Finally, across the Atlantic, American stocks had a mixed performance this week, with investors snapping up growth stocks that have declined in recent times, while they were sell-side driven on value stocks in trading this week. On Friday, unemployment data in the U.S. was released where the U.S. Department of Labor stated that non-farm employment increased by 390,000 in May, leaving the unemployment rate in the U.S. unchanged at 3.6%. For the week, the NASDAQ Composite was up 1.67% at time of writing, while the Dow Jones and S&P 500 were down 0.49% and 0.44% respectively.

Domestic Economy: Data from the National Bureau of Statistics showed a surprise increase in Nigeria’s trade surplus, as it was the largest trade surplus since the onset of the pandemic. This positive balance was driven by a surge in exports (+138% y/y), which trumped the increase in imports (+21.0% y/y). We attribute the surprise outturn in the trade balance to high oil prices (despite oil sector downturn) and the use of the Nigerian Autonomous Foreign Exchange (NAFEX) rate as the benchmark rate for computing both exports and imports. This deviates from the reality where importers source dollars from both the official and parallel markets. In coming quarters, we expect growth in imports to remain constrained as pre-election demand stokes parallel market rates while the official exchange rate remains sticky. On the export side, sustained growth in oil prices could buoy oil exports to new heights, providing a tailwind for further trade surpluses.

Equities: Broad-based losses across the local equities space, saw the benchmark NGX shed 2.18% w/w. Investor sentiment in the equities market has taken a hit in recent this week as concerns about further rate hikes from the Central Bank of Nigeria (CBN) were reflected in the market. The Industrial Goods space was the worst performer w/w, as it fell 3.73% w/w due to sell-side activity in WAPCO and DANGCEM; DANGCEM was marked down for FY’21 dividend this week. Up next, the Consumer Goods space fell 2.51% w/w, as investors took profit on counters that had posted gains in recent sessions. One of those counters, Nigerian Breweries (NB) saw its share valuation sink 8.08% w/w to trade at ₦68.70/share. Likewise, it was another red w/w close for the Banking Sector, as investors concerns over their growth prospects weighed on key players in the space. ZENITHBANK and GTCO sank 1.88% and 1.96% w/w, with both counters posting negative YTD returns. Finally, the Oil and Gas space was not spared from the bearish sentiment which dominated trading this week; the sector sank 0.45% w/w as losses in mid-small players in the space dragged its performance.

Fixed Income: In the fixed income market, trading activity was tepid this week, as the rate hike decision from the Central Bank of Nigeria drove investor sentiment. Investors have taken a wait and see approach to the market following the 150bps rate hake from the apex regulator. In the bonds space, investor activity was largely mixed with a bullish skew, as we observed aggressive buy-side action at the short-mid end of the market, while select counters at the long-end saw some pockets of demand as well. Yields on benchmark bonds eased 7bps w/w as a result. Moving to the T-bills segment; action in the market was largely limited this week, with only one day of activity observed in the space this week, where yields rose 10bps on aveage. 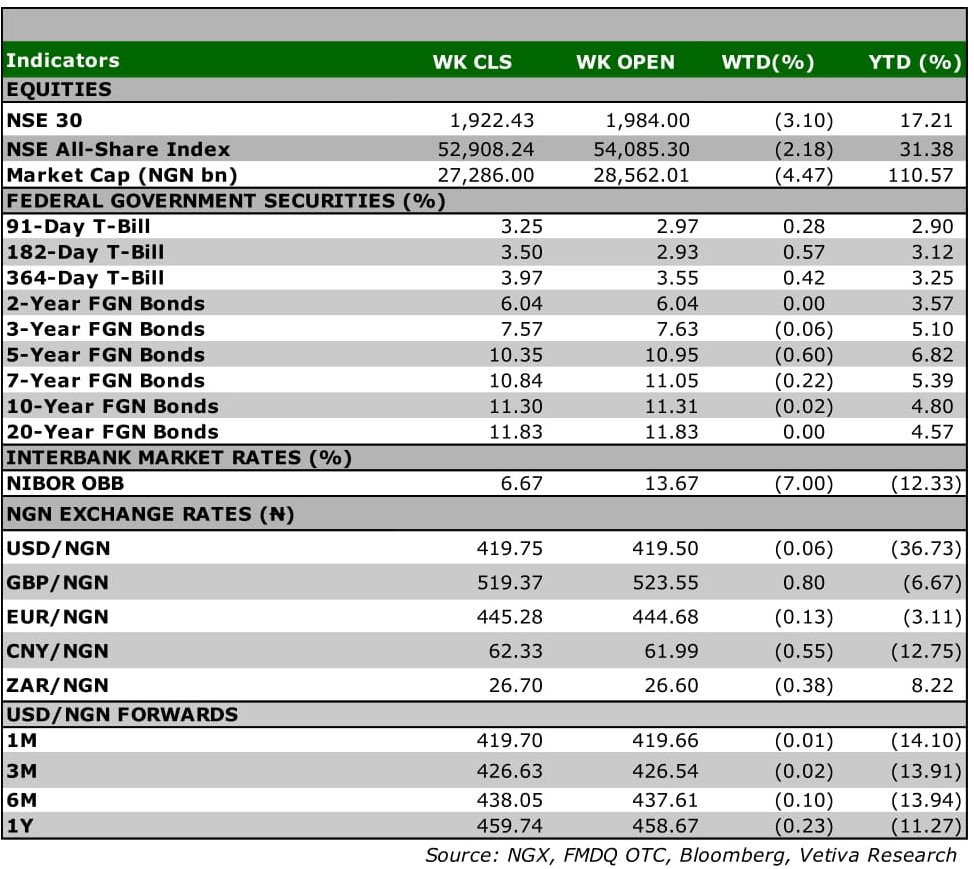 Equity market: As expected, sectoral performance improved after series of red closes this week and we expect this positive activity to filter into the first day of trading next week.

Fixed Income: Investors across the bonds space will continue to pursue attractive offers across the curve, keeping an eye on key economic indicators, while in the T-bills space we expect system liquidity to drive activity in Monday’s session.

Despite the positive performance of the ASI which gained 8.1% in May, our conviction stocks experienced a slight dip, falling by 0.2%. The negative monthly performance was mainly driven by negative sentiment towards banking stocks, with some Consumer Goods and Industrials also recording losses.

Our Oil & Gas stocks were the best performer overall, as crude prices remained above $100/bbl throughout the month, boosting upstream players. This was good news for SEPLAT, which saw its share price advance 7.5% m/m. However, downstream TOTAL remained flat m/m. This contributed a 1.1% gain to the portfolio.

It was a slightly negative month for our Industrial picks, as sentiment towards cement producers weakened over the course of the month. DANGCEM lost 5% m/m, while WAPCO went up by 0.2%. This deducted 0.2% from the portfolio’s performance.

Consumer Goods was a mixed bag, as sugar producer DANGSUGAR rose 5% m/m, while brewer and previous star performer GUINNESS declined 6% amid some profit-taking on the stock. This contributed to a net 0.5% decline to our conviction stocks.

The Banking sector was the worst performer. FIDELITYBK and ZENITHBANK lost 13% and 4% m/m respectively, while ACCESSCORP advanced 3% to close at an even ₦10.00. Once again, profit-taking and weak market sentiment were the contributors to this underperformance, and the stocks dragged our portfolio by 1.4%.

Finally, MTNN had a positive month with a 7.2% m/m gain, lifting the stock to ₦230. This added 0.9% to our conviction stocks