US stocks dipped on Friday as trade tensions resurfaced after China warned it would retaliate against President Donald Trump’s decision to ratify a bill backing protesters in Hong Kong. 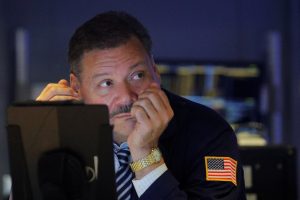 China’s counter measures could include barring drafters of the legislation from mainland China, Hong Kong and Macau, the editor of China’s state-backed Global Times tabloid said in a tweet.

The trade-sensitive Philadelphia Semiconductor index  fell as much as 0.8% and was on track for its worst day in a week.

The standoff also knocked Wall Street’s main indexes off record highs. They had closed at all-time highs in every session so far this week on upbeat domestic data and hopes of an imminent “phase one” trade deal.

“It is definitely a concern that the signing of the Hong Kong bill will be seen as an impediment to an agreement,” said Rick Meckler, partner at Cherry Lane Investments in New Vernon, New Jersey.

“At this point, investors are also using this as an opportunity to take some profits.”

A largely better-than-expected third-quarter earnings season and a dovish stance on interest rates by the Federal Reserve have also fuelled the stocks rally this month.

But more widely, the tariff war between the world’s top two economies has dented business sentiment and become the biggest risk to global economic growth. The next round of U.S. tariffs is due to take effect on Dec. 15.

Trading volumes are expected to be light as the stock market closes early on Friday, after a midweek holiday for Thanksgiving Day.

Shares of PG&E Corp (PCG.N) fell 1.6% after a report that a U.S. bankruptcy judge sided with wildfire victims and said the company was subject to a doctrine known as “inverse condemnation” that holds utilities liable for covering the costs of wildfires.