The three major US indexes fell on Thursday after conflicting headlines on US-China trade relations and a row between the world’s top two economies over the Hong Kong protest led to uncertainty over the timing of a deal to end the dispute. 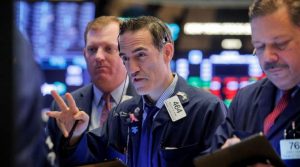 All three indexes had opened flat after a report that the United States could delay tariffs on Chinese imports even if a deal was not reached by Dec. 15, when tariffs kick in on goods including items such as electronics and Christmas decorations.

The benchmark S&P 500 ended the last session in the red after Reuters reported that the deal could slide into next year. Political tensions between the two sides after U.S. legislation supporting Hong Kong protests have also dulled the mood.

“With the ebb and flow of developments around trade, we are seeing investors taking a pause,” said Matt Hanna, Portfolio Manager at Summit Global Investments. “The bigger concern right now is whether they are going to get a trade deal done or not.”

Chipmakers with a large revenue exposure to China were down, with the Philadelphia Semiconductor index .SOX falling 0.7%.

Tiffany & Co (TIF.N) gained 2.8% as Reuters reported LVMH (LVMH.PA) persuaded the jewelry chain to allow it to access its books after the French luxury group raised its bid to about $16 billion.