U.S. stocks posted broad-based declines on Monday, but bounced back from session lows, after President Donald Trump’s surprise threat to raise tariffs on Chinese goods this week, sparking a flight from riskier assets. 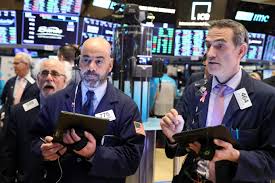 Trump on Sunday said tariffs on $200 billion worth of Chinese goods would increase to 25% from 10%, reversing a decision he made in February to retain them at 10% as the two sides made progress on trade talks.

China said on Monday a delegation is still preparing to go to the United States, but did not mention if Vice Premier Liu He, its lead official in the negotiations, will be part of the team as originally planned.

“The news gave investors a chance to take profits off the table. Markets are comfortable with the idea that Trump is using this as a negotiation tactic to get a trade deal done,” Peter Cardillo, chief market economist at Spartan Capital Securities in New York.

“Whether or not China will be able to meet the demands of the administration, that is questionable, but I think a trade agreement is on its way.”

Boeing Co, the single largest U.S. exporter to China, fell 1.7%, while chipmakers, which get a good portion of their revenue from China, tumbled.

The Philadelphia chip index slid 2.34%, while the broader technology sector fell 1.28%, the most among the 11 major sectors trading lower.

Apple Inc declined 2.1%, and dragged on the tech sector, while other marquee names such as Amazon.com Inc, Microsoft Corp and Facebook Inc fell about 1%.

The threat, which rekindled fears of a global economic slowdown, sent U.S. Treasury yields lower as investors turned to low-risk government bonds. [US/]

In a bright spot, Anadarko Petroleum Corp rose 3.6% after Occidental Petroleum Corp increased the cash component of its $38 billion bid, removing a need for any deal to receive the approval of Occidental’s shareholders.

Traders work on the floor at the New York Stock Exchange (NYSE) in New York, U.S., May 3, 2019. REUTERS/Brendan McDermid

Occidental is trying to convince Anadarko to accept its offer and abandon the agreed $33 billion sale to Chevron Corp. The oil major was up 1.6%.